One of My Pet Hates... Litter

I know this blog is a mixed bag, and not just used for rants, but today I really feel like having one. A rant, that is. You see, one of my absolute pet hates is litter, and there's rather a lot of it about at the moment, which has inspired this post.

It really does drive me crazy. It looks horrible, is dangerous to wildlife and just makes an area look really grotty, even if it's not. I live fairly near a school, and although of course I can't prove who drops litter, there is an awful lot down the alleyway near me, and in other places where kids have to walk to get to school. I suspect a lot of it is teenagers showing off to their mates - especially since there's a bin in the alleyway they could use!

The trouble is, once an area has one piece of litter, it makes people think it's okay to drop more. I suppose the mental attitude is that "well, there's litter there already, so what's one more piece?" and it's not right, not fair. I constantly have to watch the ground when I'm walking locally to make sure I'm not going to tread in anything unpleasant (dog poo is a whole other rant - don't get me started!) or that my dog isn't going to eat something that someone's dropped. Okay, if he eats a crisp or something, it's not the end of the world, but chocolate is poisonous to dogs so I have to be really careful. I know councils won't put more bins in because people set fire to them, and then someone has to be paid to empty them, but I just wish they'd do something to make people have more respect. Can't they just stuff the rubbish in their pockets until they get to a bin?! That's what I do when I'm out walking. But then, it isn't people who love the countryside that make a mess - when I'm out in the Peak District or similar, there's very little litter - it's pretty much concentrated in towns and villages, and by the sides of roads. Clearly dropped by people that don't care if they're making the country look like a dump.

Busy roads are another place where there's lots of litter, i.e. duel carriageways and motorways. Of course, this means that it could be absolutely any motorist, but I've known a few people say that wagon drivers are particularly guilty of this, which is the most ridiculous thing of all. They have tons of room in their cabs, why can't they just throw it in the opposite footwell for the time being? Yeah it'll be messy for a while, but when they pull over where there's a bin, they can put the rubbish in the bin. But obviously they - and other people - don't, because when I'm driving down motorways and duel carriageways, the amount of rubbish by the side of the road has me clutching my steering wheel more tightly and grumbling to myself.

What's annoying about it is... what can we do about it? Yes, we could don gloves and grab litter pickers and go and pick it up, but we're busy people with busy lives and haven't got time to do it. Even if we had, it wouldn't help unless the attitudes of the people dropping the rubbish in the first place were changed. People need to be educated about litter, and councils need to do something to tackle it. I have thoughts on how people could be utilised to help clean up, but that's an ever so slightly political rant, so I'm going to steer clear.

I just really wish there was a perfect solution to the problem. Until there is a solution, I'm going to continue to moan about it, and do my little bit by picking up what the wind blows onto my property, and by putting my own rubbish where it belongs... in the bin. 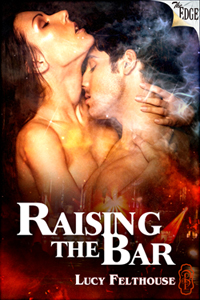 When Kayleigh takes a gap year before starting University, she decides she’s going to stay away from guys and just concentrate on having fun and experiencing life. That means going through a lot of batteries, but she’s happy and satisfied.

That is, until she gets to Spain on her travels and meets her new co-worker, Luciano. The scorching hot Spaniard soon has Kayleigh’s knickers in a twist— literally—and the time they spend together seriously raises the bar for her sex life. How will any other man ever compare?