The tortoise, the cranes, and now this little fella came by to visit us the week of preparing for Hurricane Irma. This guy was out by the pool the morning after the storm hit. We lost power for a week, everything in the fridge and freezer, had some fence and tree damage but it could have been a lot worse. The kids went bat-shit crazy out of school with nothing to do. Thankfully the local bowling alley had power so we spent half a day there, and there was always the pool. Also, with four I-phones in the house we (the adults) enjoyed the AC in our cars while we sat and recharged our phones so the kids could play games on them. Three days was spent in NC as we'd already planned a trip there to surprise my dad on his 80th birthday. It was uncomfortable, stressful, but we had our good days, too. 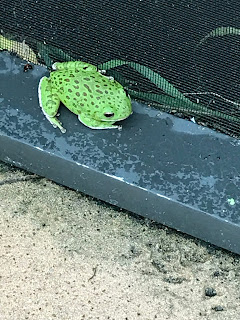 Posted by Tory Richards at 1:37 am No comments:

Yes, I live in Florida. We live in Volusia County and are about as prepared for the hurricane as we can be. The only thing we didn't get was a generator and since they're saying that this is going to be an active hurricane season that item will be on our list of immediate buys once we get through Irma. The last time I checked things were looking slightly better for us but still, anything can happen. Tornados are another concern and of course the high winds. I think it's clear by now that this storm is going to touch all Floridians in some way.

On another note, we had a couple of visitors this week. I went out to get the mail one day and the tortoise was out there chomping down on something. The next day the cranes came to see us. They had a chick with them but I kept my distance as I've been chased by one of them before. Back when I could run. They'd catch me for sure now:) 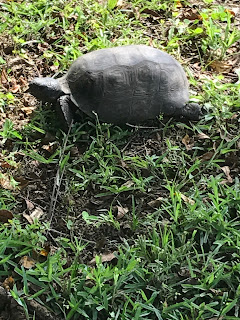 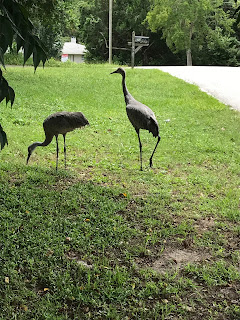