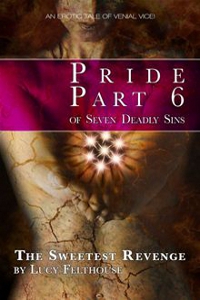 I won't repeat the story of how this anthology came to be, if you scroll down and check out Lily's post, she's divulged all the details ;)

But what I will say is how much fun it was to write my particular story. When I snagged the sin "pride" for my story, I had no idea what I was going to do with it. Lily had suggested I penned a lesbian tale and so I fixed that in my mind. Then, one day when I was walking my dog, the idea came to me. I continued thinking as I walked, and by the time I got home again, I pretty much knew what I was going to do. I had other projects to finish up before I could start the story, but that gave it time to marinade in my brain.

Finally, I started writing The Sweetest Revenge. And once I started it, I think I had it finished pretty quickly, too. My sexy Sapphic tale about a smokin' hot biker chick and the girl that fancies her was born!


Abigail’s had a crush on Mackenzie the motorcycle courier for months, but Mackenzie doesn’t even know she exists. Nothing exists for Mackenzie, though, except for her pride and joy – her Ducati Monster.

After an unpleasant encounter, Abigail decides to get her own back on Mackenzie – in the worst possible way. Despite the pleas of her colleagues, Abigail plans to hide Mackenzie’s precious motorbike, and take the haughty bitch down a peg or two.

Naturally, when Mackenzie discovers her bike is gone, there are fireworks. It’s April 1st, so she suspects trickery rather than criminal activity, but that doesn’t mean the person responsible will be getting off lightly…

And a snippet from the book:


As soon as she heard the roar of the engine, Abigail’s heart rate increased. She could recognise it at quite some distance now, and as it drew closer to her office building, she could feel the vibrations beneath her feet.

Grabbing a handful of documents from the pile on her desk, Abigail headed over to the photocopier which stood by the window. That way, she could pretend she was duplicating paperwork, when in fact she was looking out of the window at the motorcycle and its rider.

And there she was. Mackenzie, in all her leather-clad glory, thundering into the car park. Her beautiful red hair flapped beneath the helmet, slowing to a stop as the motorcycle did. The khaki green mean machine, as Abigail had nicknamed it, was as stunning as ever. Between them, rider and bike made a very attractive picture. One Abigail could quite happily look at all day long.

She realised she hadn’t actually made any attempt to photocopy anything yet, so she hastily shoved one of the pieces of paper under the lid, keyed in the command for thirty copies and pressed the green button. Then she was free to gaze out of the window for a good long while before anyone suspected anything.

Not that it was any big secret, anyway. The entire office knew of Abigail’s crush on the motorcycle courier, and she was often teased about it. The only reason she wasn’t being ribbed right there and then was because nobody else was tuned into the motorcycle’s engine noise frequency like she was—they wouldn’t have realised Mackenzie was here unless they looked out of the window. Glancing behind her, Abigail saw that everyone was engrossed in what they were doing, so she could perv out of the window, completely undisturbed and without mockery.

Turning back, she saw that Mackenzie had now put the Ducati Monster on its stand and flung one long leg over it. She tugged off her heavy duty leather gloves, lay them on the seat and proceeded to undo her helmet. Abigail held her breath. This bit was always her favourite. The way the younger woman managed to still look gorgeous when removing a motorcycle helmet was incredible. Her long red hair flowed free, and after a couple of quick finger-combs, it looked immaculate. For the hundredth time, Abigail wondered what her secret was. She was sure if she went on a motorcycle without tying her hair back, it would look like a rat’s nest by the time she arrived anywhere.

Clipping the helmet’s chin-strap back together, the courier then hung it from one of the handlebars, pulled the keys from the ignition and moved to the box attached to the back of the bike. She unlocked it, retrieved two small parcels and shut and locked the lid before retrieving the keys and walking towards the front door of the building. She wore sensible, rather than fashionable, boots and leathers and they lent her walk a strange gait. Abigail didn’t care. She was so infatuated with the woman that it would take more than that to put her off.

She watched as Mackenzie made her way into the building and was eventually lost from sight. Switching her attention to her fake photocopying, she saw that the dated machine was still chugging its way through the original thirty copies she’d requested. She grinned. At this rate, it’d still be going by the time the courier exited the building and got back on her bike. If there was someone at Reception, then of course the process of having a parcel signed for was speedy. Usually, that’s what happened. But occasionally if there was some super-sensitive reason no one else could handle the delivery, the member of staff it was for would have to come and sign for it themselves. That, of course, meant it could take much longer, depending on whereabouts they were in the building and how long it would take them to get to the front desk.

Abigail herself could be at Reception in under a minute from her desk, and would gladly be, if her presence was requested by the goddess Mackenzie. All she would have to do was click her fingers and Abigail would come running. And not just for a parcel. For whatever reason she damn well felt like giving.