Coming Together in Vein

Check out this great new vampire anthology, edited by Lisabet Sari - all proceeds go to the charity Doctors Without Borders. 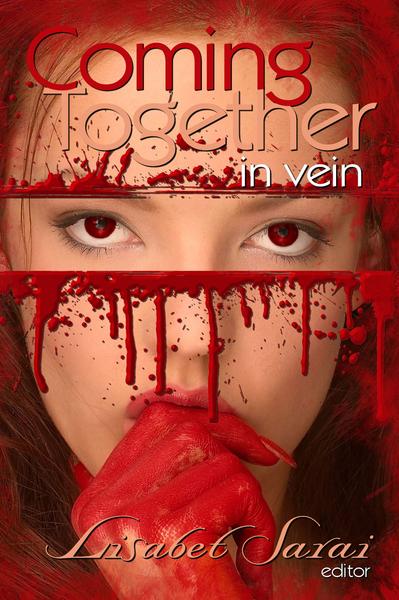 Helping Vampires to Save the World
Let's face it. Vampires are sexy. Something about the undead stirs up our juices. Perhaps it's their irresistible power. Even when we know the danger, we're so very tempted to surrender to their all-consuming lust. Maybe we want to comfort them, to save them a lonely, bloody eternity. Maybe we secretly crave immortality ourselves.

Vampires are frequently portrayed as evil or at least amoral, viewing humanity from the jaded perspective of centuries. Now, though, vampires are doing their part to save the world.

You can help MSF in its life-saving mission, simply by indulging your passion for vampires. Buy a copy of Coming Together: In Vein in ebook, Kindle format, or print. Enjoy! Then help spread the word! Every copy we sell has the potential to save someone's life.

The list of contributors includes many names you'll recognize. Every one of these authors has provided his or her work free of charge, to support the charitable aims of the project. Furthermore, the editor is giving away a free copy of her short story collection Body Electric  to everyone who buys a copy of Coming Together: In Vein. (For details of this offer, click here.)

You'll find an excerpt below – just to whet your appetite.

Sink your teeth into Coming Together: In Vein. Help our vampires save the world.

From “The Curse” by M. Christian

She was almost late coming into work. Unheard of, though no one would have noticed. She’d stood and stared at the bare bed, looking for some kind of evidence, some kind of physicality to match her filling memory. They’d stood on the balcony, looking at the stars and the brilliant lights of the city. A natural position, Ellie’s hands on the cold metal of the balcony, the other woman’s hands around her waist, her breath on the nape of her neck. A cascade, Ellie remembered, of goose bumps, but not from the cooling night.

Hard daylight. Blinking, wrapped in a towel, she stepped out, looking for footprints, hand prints. Moisture, a sparkling flicker of dew, anything to prove it had really happened.

They’d kissed—yes, and she tasted her again in memory:  the pressure of lips, the heat of her, the rhythm of their breathing. They’d come inside, kissed by the foot of the bed. The whisper of her black satin dress, the sudden too-tightness of Ellie’s jeans. The surprising laughter when the kiss broke, when the high of their excitement crested. The way, then, the giggles had faded as she had put her hands on Ellie’s face, traced the contours of her cheeks, her jaw, the way she’d tapped Ellie’s nose, whispering “button” in a rich, throaty voice.

In the warming room, Ellie stood at the foot of the bed, turning so she was facing the way she remembered standing. Yes. Eyes brown with flickers of amber. Lips too full, too red, too silken to be anything but a fantasy running around in the real world. Lithe, boyish. She remembered how she liked to watch her move, liked to watch her walk barefoot across the apartment. Graceful, as if every muscle were elegantly conducted to some lovely score.

Her shoes?  Yes… She’d kicked them off, near the foot of the bed. Without really thinking of the woman walking the hard pavement on thin, bare feet, Ellie dropped down to look, hoping for the reality of a simple black pump. Nothing, of course. Memories, but nothing else.

A glance at the clock brought up more—her face, glowing as if from low embers, smiling up at her. There, in her eyes was  the lust Ellie'd wanted, needed, but also something else, something finer, softer, kinder. There was something else there, in the dull red glow, something that had made Ellie’s heart melt as fast as her body. Liquid—yes, molten....

A glance at the clock also brought a slap of reality. 8:05. Half an hour on the bridge, fifteen minutes from the garage to the office. She was going to be late.

Still, hurrying, there was no escaping the growing number of ghosts from the past, that expired night: brushing her hair brought up a voice, rich and rumbling, and the feel of strong fingers stroking the top of her head; doing her teeth was those same fingers brushing her lips, feeling them before another kiss…

Finally, she had to stop, had to put both hands on the edge of the sink and breathe deep. In and out. Strong, steady breaths. She was late, she needed to get dressed and get going. She had work to do, lots of work to do. If it had happened... if it had happened then it was nice, and that was all. It didn’t change anything. If it hadn’t, then the world was as it was. Ellie, her little place, her little life, her job—the days falling down, one by one.

Tears, hot on her cheeks. How she wanted it to be real.

Eyes open, puffy and red. Her face in the mirror, looking broken and small. But then she saw it, as real as a shoe, as foot and hand prints in night dew. Evidence, reality. Purple and harsh, sore, yes, but evidence none the less. A scarf would hide it, but not for now. Lateness, the bridge traffic, the walk from the garage, the firm, everything was gone from her mind. For now, as she stood in the window, the bruise on the slope of her neck was too priceless to hide, too real not to be stared at.
Posted by Lily Harlem at 8:02 am

Email ThisBlogThis!Share to TwitterShare to FacebookShare to Pinterest
Labels: Coming Together in Vein, Doctors Without Borders, Lisabet Sari