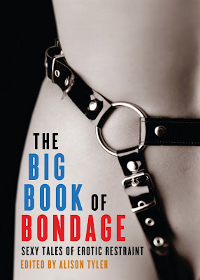 Want bondage? You got it! Alison Tyler just released The Big Book of Bondage, and it contains my quirky and sexy tale, Balancing the Books.

Here's some info on the anthology:


Surrender to your fantasies. Every submissive willingly does: bound and helpless, expecting the ecstasy of her master’s lash. Never mind the leather—clothed or naked, she is stripped down to only the most basic physical and emotional need, completely exposed. But it’s this swirl of sensations and feelings that combine in a perfect storm of kink and makes the seemingly impossible not only occur, but happen in a way that creates a sexy good time for everyone involved. The sensual stories that Alison Tyler has assembled in this collection delve into the dynamics of relationships filled with such unrestrained passion, revealing a world of beautiful contradictions that will thrill and inspire you. Some of these tales show how the everyday can be instantly transformed into pulse-quickening moments laced with eroticism.

And here's an excerpt from my story:


A bead of sweat ran down the side of Philip’s head and trickled into his hairline. He’d been lying flat on his back on the cold parquet floor for what felt like hours. Realistically, it probably hadn’t even been one hour, but because he’d been trying so hard not to move a muscle for fear of toppling the stack of hardback books resting on his abdomen, every single minute was torture.

And yet, at the same time, it was complete and utter bliss. Giovanna was sitting on a wooden chair, the legs of which were either side of his hips – as were hers – and she was using the pile of books as a table. She idly flipped the pages of the weighty tome she was pretending to read, and studiously ignored Philip, as though he really were nothing but a table.

Philip’s cock had never been so hard. He was torn. Part of him wanted the books to fall so Giovanna’s beautiful eyes would flash with anger and she would punish him the very best way she knew how. The other part wanted to please her, in the hope that she might let him bury his face between her thighs and lick her delicious pussy to orgasm, and maybe, just maybe, be allowed to come himself.

Another droplet of sweat followed the first one into his rapidly dampening hair. Philip’s erection strained beneath his clothes, and he decided to try and distract himself by thinking of something else. Trees. Taxes. Tridents.

It didn’t work. Instead, his mind wandered to how he’d gotten into this predicament in the first place.

Giovanna was Philip’s boss – in the usual employment sense, as well as the mistress and slave sense. Just a few short weeks back, he’d been wandering the high street of the town he lived in, and had come across an amazing-looking bookshop. He’d peered through the window, fascinated. The slightly gloomy interior was all dark wood and spiral staircases, and was a book lover’s wet dream. And Philip was a book lover. Turning, he made for the door. As he reached it, he noticed a sign stuck to the pane of glass in its centre.

Philip didn’t need a job. He was, in fact, a highly qualified accountant, and some of the past investments he’d made had come good and meant that he could live very comfortably off the profits. In fact, it wasn’t worth his time to work as the tax man would pinch even more of his pennies.

Philip didn’t need any books, either. His custom-built home library was fully stocked with an abundance of fiction and non-fiction, and he really needed to read and get rid of some of them before he started purchasing more.

He peered through the door, catching sight of a voluptuous bespectacled woman standing behind the till, writing in a notebook. She sure was easy on the eye, with her long dark hair pulled up into a high ponytail, and the hint of ample cleavage peeking out of the top of her blouse. She must have caught sight of him out of the corner of her eye because her head snapped up from what she was doing and she looked straight at him. Peering over the top of her glasses, she continued to gaze at him, unsmilingly. Many people would have found her demeanour cold; unapproachable.

Philip pushed open the door and walked in. Before he knew what he was doing he’d walked straight up the counter and the aloof woman behind it, and said,

She put down her pen and raised an eyebrow.

“And what are your qualifications?”

He was, in fact, vastly overqualified for the job she was offering. He could do the paperwork for the bookshop standing on his head. With one hand tied behind his back. However, the cool, unimpressed stare the woman gave him made him want to impress her – and so he gave her the full whammy of his qualifications and experience.

The woman’s face had remained impassive.

“It sounds as though you’re used to much bigger accounts than you’d be dealing with here. Why on earth are you interested in this job?”

Because I want to fuck you.

Posted by Lucy Felthouse at 6:15 pm