Well Colour Me Lustful and Give me a Laptop

Picture Botticelli’s lovely painting of Venus and Mars. You know the one I’m talking about, the one that you just want to stand in front of all day staring and sighing and thinking romantic Renaissance thoughts.  Have you got that in your head? Good! Now picture the goddess in a black corset  and a bad-ass strap-on. And all those cherubs in the picture, well picture them as overworked servants of the goddess, whose job it is to hold the sex toys she’d not using at the moment and offer them to her with hot little hands … or wherever else she wants them to hold them.

Now then, as for Mars. Weeeell, picture Mars, or in this case Jack Calendar, dressed in a ratty track suit a pair of badly worn Nikes Add to that an aging Avengers t-shirt, and imagine Mars with a laptop instead of a sword and shield. Are you starting to get the idea? 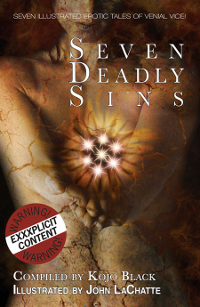 Now then for the story that goes with our lovely Botticelli does DC Comics, think about a cross between The Big Bang Theory on steroids and The Corleones from The Godfather meet The Olympians from Greece – a truly dysfunctional family. The Olympians are moonlighting in London. Aphrodite has a head for business, and poor Jack Calendar has been caught peeking while the goddess of love does the nasty with …. well just about everyone! When Jack’s punishment for peeking is to be hired on as Aphrodite’s PA, he quickly discovers that his job demands special skills, Aphrodite is quick to offer on-the-job training.

Aphrodite Gets a Piece of the Action can be downloaded as a stand-alone novella or it can be purchased with the other six sins in Sweetmeats Press’s fab new anthology, Seven Deadly Sins. This fabulous anthology contains stories by Lily Harlem, Sarah Masters, Victoria Blisse, Lucy Felthouse, Lexie Bay, and Rebecca Bond. It’s illustrated by John LaChatte and edited by KoJo Black. 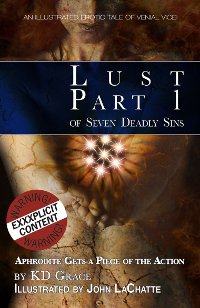 Blurb for Aphrodite Gets a Piece of the Action:

There’s no place to go but down when, against all odds, sexually inexperienced, nerd’s nerd, JACK CALENDAR gets shanghaied into being APHRODITE’s PA. And she has him going down a lot! Who could have guessed that the moonlighting Goddess of Love had head for business? The hours are long, the work is difficult and the Goddess is demanding and insatiable. Then there’s her family, who make the Corleones look like the Brady Bunch.

A PA’s work is never done, and Jack wasn’t hired for his impressive organizational skills. Nerdy Jack is at Aphrodite’s beck-and-call, because he’s the only mortal she has ever known with a lust powerful enough to match her own. Jack’s never had so much sex. He didn’t even know one could have so much sex – with someone other than themselves, that is. Just when he’s starting to get the hang of serving the goddess, Jack meets the husband, whose jealous temper is volcanic to say the least. Can Jack survive a run-in with the original dysfunctional family, or will he end up just one more manipulated mortal fucked by the gods?

Coming up wasn’t necessary. Startled, Jack lost his balance on the limb and fell out of the tree backward, his fall being slowed by the hard thwack, thwack, thwack of a half a dozen smaller, more supple branches before he hit the manicured lawn flat on his back leaving him winded and stunned.

‘Don’t matter. When her dad gets through with him, he’ll wish he was dead.’

‘Shut up, you two. No one asked your opinion,’ a third voice said. Then the owner of that voice grabbed Jack by the arm and hauled him to his feet nearly dislocating his shoulder in the process. He found himself nose to nose to a man with perfectly coifed hair that looked like it came straight from an eighties cop show. And the rest of him looked like a poster boy for a hard core muscle mag, right down to the bad-ass eagle tat rippling up his bulging right bicep. If that wasn’t crazy enough, the man was wearing a toga, for chrissake!

His pecs bulged and his nipples looked like they’d been clamped within an inch of their lives. And who the hell noticed a man’s nipples, Jack wondered, especially when Blondie’s old man was about to make him wish he were dead.

‘Tuck it in, Bub,’ Toga Man nodded to Jack’s cock which, embarrassingly enough, still offered a full frontal salute. He shoved and shifted it back into his track suit, but even then it led the way as he fell into step behind Toga Man with two black-suit security types flanking him. What the hell was the matter with him? He could die or worse and he still had enough wood to start a bonfire.

‘Big Z ain’t gonna be happy you watching his daughter do the dirty,’ the suit to his left spoke out of one side of his mouth.

‘You shut your pie-hole,’ Toga Man said. ‘You dunno what makes Big Z happy. Besides, she ain’t his daughter.’

Big Z? What the hell was this, Jack wondered, some kind of Mafioso toga party? They made their way through the enormous marble foyer of the house Jack hadn’t noticed being anywhere nearly so huge from his perch in the oak tree. But then it wasn’t the house he’d been looking at, was it? At last, Toga Man dismissed the Mafia-thugs and fast marched Jack, both hands protectively folded across the bounce, bounce, bounce of his erection, to another set of double doors at the end of a long hallway. He threw them open and with a hand on Jack’s shoulder, half shoved him into an opulent study. There, Jack found himself face to face with the bare ass of a bloke doing the nasty up the bumhole of another, a situation that didn’t prevent Toga Man from announcing loudly. ‘We found this scumbag up the oak tree watching Aphrodite.’