Make Do and Mend by Lorna Peel (@peellorna)

At the outbreak of World War Two in September 1939, almost a quarter of the British population was entitled to wear some sort of uniform. The increased demand for uniforms put enormous pressure on Britain's textile and clothing industries and rationing was introduced in June 1941. Silk was one of the first fabrics to go as it was needed for the war effort, so Into The Unknown’s Kate Sheridan was very lucky to have been bought two sets of silk lingerie by her aunt Helen to replace her embarrassingly old-fashioned underwear.

Rationing worked by allocating each type of clothing item a value in points. Every adult was initially given an allocation of 66 points to last one year, but this allocation shrank as the war progressed. Eleven coupons were required for a dress, two needed for a pair of stockings, and eight coupons for a man's shirt or a pair of trousers. Women's shoes meant handing over five coupons, and for men's footwear seven.

Despite these shortages, people were encouraged to keep looking fashionable in order to keep up morale and the 'Make Do and Mend' campaign was launched to encourage people to make their existing clothes last longer. The ability to repair, alter and make clothes from scratch became increasingly important as the war went on. Kate would have studied needlework at school in Ireland, so she wouldn’t have found making clothes from a pattern too daunting a task.

Over 40 million gas masks had been distributed around Britain by the outbreak of war. The population were told to carry them at all times in the standard-issue cardboard box tied up with string. Fashion designers quickly saw a gap in the market, turned the ugly boxes into handbags at the top and a space at the bottom for the mask, and these were snapped up by many women like Kate.

Make-up was never rationed, but was taxed and very expensive. As with their clothes, women found imaginative ways around shortages. Bright red lipstick was a way to look glamorous, even if you couldn’t afford any other cosmetics. And when it just couldn’t be found, beetroot juice was used instead of both blusher and lipstick and boot polish instead of mascara. When stockings were in short supply, an eyeliner was used to draw a ‘seam’ up the back of the legs—which may also have been carefully painted with gravy browning to appear like a tan shade of stockings. So, instead of being moth-balled for the duration of the war, fashion became more inventive and individual—the colours brighter and the colours bolder.

Following Helen into a department store’s lingerie department, and into a changing room, Kate stripped right down to her embarrassingly old-fashioned underwear. Catching sight of the shop girl’s smirking face in the mirror, Kate wanted the ground to open up and swallow her. The girl measured her before bringing a selection of bras and knickers for her to choose from. Kate stared in consternation. How could she choose? They were all beautiful. Thankfully, Helen decided for her.

Kate had been running her fingers over the silk in awe and jumped. “Yes, I will. Thank you.”
She changed into the lingerie and stared at herself for a long time in the mirror. Silk. She had never felt anything so soft before.

“Let’s see, Kate.” She heard her aunt’s voice, opened the curtains, and both women stared at her. “Good Lord.” Helen seemed astonished. “You do have a figure, after all.”

Passing a boutique a little later, Kate stopped and gazed at a suit in the window. Helen had walked on but returned to her and smiled. “That’s very smart, isn’t it? Do you want to try it on?”

“Oh, no, it looks very expensive.”

“It doesn’t cost anything to try it on.”

So the suit was tried on and Kate paraded up and down the shop examining herself from all angles. The suit was deep green and flattered her curvaceous figure.

“That’s just as well because it’s yours.”

“Mine?” Kate’s mouth fell open. It must have cost a fortune. “Oh, thank you.”

“Nonsense, you’re starting to look feminine at last. Shoes and a handbag next.”

They found a black handbag and matching shoes in a shop across the street. Again, Kate paraded up and down, but this time to get used to the high heels. Standing up in them for the first time, she had almost toppled over. Kate tottered along the street, finding herself much taller than Helen, and followed her into a hair salon.

“Your hair isn’t too bad, actually,” Helen told her before turning to the stylist. “A trim, and style it, please.”

Within an hour, Kate’s hair had been swept back from her face into a chignon. Her aunt leaned forward.

“Cheekbones, too,” she murmured and nodded. “Beauty salon next.”

A further hour passed with various powders and lipsticks being tried and tested before Kate opened her eyes and gazed at the film star in the mirror, hardly recognising herself.

“Oh, Kate,” Helen breathed. “You’re beautiful.” She turned to the three women standing behind Kate’s chair. “Whatever she’s got on, we’ll take it.”

Out on the street, Kate found herself being stared at and even attracted wolf whistles
from a group of soldiers. It felt strange—embarrassing—but flattering, too. 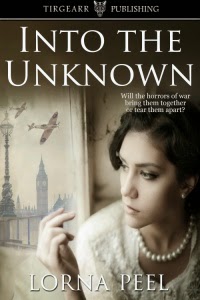 London on 3 September 1939 is in upheaval. War is inevitable. Into this turmoil steps Kate Sheridan, newly arrived from Ireland to live with her aunt and uncle, and look for work. When she meets Flight Lieutenant Charlie Butler sparks fly, but he is a notorious womaniser. Should she ignore all the warnings and get involved with a ladies man whose life will be in daily danger?

Charlie Butler has no intention of getting involved with a woman. But when he meets Kate his resolve is shattered. Should he allow his heart to rule his head and fall for a nineteen-year-old Irish girl while there is a war to fight?

Private conflicts and personal doubts are soon overshadowed. Will the horrors of war bring Kate and Charlie together or tear them apart?

Lorna Peel is an author of contemporary and historical romantic fiction. She has had work published in three Irish magazines – historical articles on The Stone of Scone in ‘Ireland’s Own’, on The Irish Potato Famine in the ‘Leitrim Guardian’ – and Lucy’s Lesson, a contemporary short story in ‘Woman’s Way’.

Her first novel, Only You, a contemporary romance, was published in 2014. Into The Unknown, an historical novel set during WWII, will be published on 5 May 2015.

Lorna was born in England and lived in North Wales until her family moved to Ireland to become farmers, which is a book in itself! She lives in rural Ireland, where she write, researches her family history, and grows fruit and vegetables. She also keeps chickens (and a Guinea Hen who now thinks she’s a chicken!).

Make sure to follow the whole tour—the more posts you visit throughout, the more chances you’ll get to enter the giveaway. The tour dates are here: http://www.writermarketing.co.uk/prpromotion/blog-tours/currently-on-tour/lorna-peel-2/
a Rafflecopter giveaway
Posted by Lucy Felthouse at 9:00 am