Once Upon a Time I Dug Deep

Once upon a time, when the world was young, I was a student of archaeology. And boy did I love it!


I’ve always adored history, archaeology, and anything that helps to explain how the ‘who we were then,’ became the ‘who we are now.’
As part of my training, I took part in some wonderful digs- and the jewel in that crown was my time in Lepti Minus, Tunisia. I was a member of a team made up of students from one UK, and one US, university. I had the pleasure of working on uncovering a beautiful Ancient Roman bath house, walk the olive groves in the hunt for rogue pieces of pottery, and spend many an hour washing and cataloguing finds, sat on the open roof of the semi-built house, in which we froze by night, and boiled by day- happy times!!


When Xcite kindly asked me to write a second novella for their Secret Library series, it seemed an opportune moment to recall those days under an African sun. Thus Digging Deep was born. 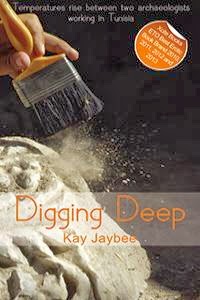 
Dr Beth Andrew’s first foreign excavation as a site leader, which she co-run’s with the American archaeologist Dr Harrison Harris, gets off to a shaky start due to the jealous interference of Harrison’s ex, and an overzealous student... Love and lust really can cloud even the cleverest person’s judgement!


I should of course stress that the “happenings” within Digging Deep’s virtual pages are all fiction (well, nearly all) - although there was a snake...I really don’t like being surprised by snakes...


...Beth cut through a layer of denser sand, wishing Ryan wasn’t working the section directly behind her. She daren’t turn to check he was all right like she did her other students. The last time she’d done so, she had caught him ogling her butt with a suggestive wiggle of his eyebrows, which couldn’t have been mistaken for anything other than the type of lustful intentions her own imagination had just so colourfully displayed to her. Ever since then, she had been more than a little self-conscious of the stretch of her cotton combats over her backside.


Crouching on her haunches, letting her eyes roam across the site as a whole, Beth struck Ryan from her mind, and began weighing up the significance of what she was excavating in relation to what else was opening up on the dig before her. As she leant in closer, a glitter of something just below the upper level of the sand caught her eye. Trailing her brush across the yellow surface, she mentally listed all the hidden things that might shine: mosaic tesserae, jewellery, votive offerings to the gods …


With a sharp scream, Beth stumbled backwards out of her square in a mad scramble to escape. Her find was none of the things archaeologists’ dream of uncovering. In the haste to get away, her left foot caught on the guide string that divided her metre section from the next. Tripping, she fell heavily backwards.


Flushed with an embarrassment that enflamed her already pinkened features, Beth found herself being scooped onto Ryan’s lap, his arms wrapped protectively around her.


Alerted by the unexpected shriek, the other students in the immediate vicinity began to gather round. Most of them, however, backed away the moment they saw what had caused Beth’s unusual lack of professionalism; except for the leggy American, who looked at Ryan in disgust, pointedly rolled her eyes at Beth, and returned to her work.


Beth didn’t have time to think about the blonde’s unsympathetic reaction. All her attention was on the bronze snake which hadn’t appreciated its home being disturbed by an inquisitive human. She was convinced it was staring straight at her, its tongue flicking, smelling the air around it in an accusatory manner.


‘Don’t worry about it, boss.’ Ryan ran a consoling hand down Beth’s cotton-covered arm, creating small prickles of uninvited lust that appeared on top of the prickles of fear already there, and sending them both tripping towards her crotch.


Rueing her kinky imagination, Beth took another step away from her student. Moving rather too fast, she collided with the stocky frame of Harrison Harris. He’d crossed the site on his ever-silent feet to see what all the fuss was about without her even noticing, causing Beth to jump out of her skin for a second time. ‘Honestly. Harrison, don’t you ever make a sound when you move?’


‘Hardly ever!’ He treated her to one of his Colorado smiles, making Beth suspect that he was privately laughing at her. ‘You OK, doll?’


Not stopping to waste her breath on asking him for the umpteenth time not to call her “doll”, Beth did her best to ignore the twinkle in Harrison’s eye that confirmed he found the situation hilarious, and settled for being grateful that he hadn’t vocalised his mirth in front of their charges.


Beth had no doubt this little episode would be site folklore by dinner time. She didn’t usually care about that sort of thing, and was always one of the first to laugh when she made a fool of herself, but now she found her face darkening with embarrassment in the face of her colleague.


‘Is that all?’ Harrison bent down and retrieved the brush Beth had abandoned in her hurry to move away from the snake. ‘You’re sure?’


‘I’m sure. Just shock. I don’t like snakes. I haven’t damaged anything, I hope.’


‘No harm done.’ Harrison shot Ryan a look which plainly said “this time”, making Beth wonder if the timing of the breaking of the mosaic had gone unnoticed after all. ‘Here you go, doll.’ He gestured to the creature. ‘He’s just a sand snake. Won’t do you any harm. I’ll move him somewhere safe.’


‘Thank you.’ Beth’s words came out rather weakly as the unfortunate creature was picked up and repositioned against a dune of previously excavated sand, into which it quickly disappeared. Seeing Harrison rehome the creature with no more fuss than if he’d moved a worm from a flower bed to a vegetable patch made Beth even more cross with herself for being so feeble in front of a man she’d so badly wanted to impress. She found herself babbling in explanation, ‘Insects I have no problem with. Spiders are cool. But snakes … I can’t stand them.’


This time Harrison did laugh openly, wiping one of his calloused palms across his forehead, smearing dirt into his spiky hair and knocking back his faded Stetson in the process. ‘You’re a regular Indiana Jones, doll!’


Keen to keep the general atmosphere light, Beth added, ‘Well. As long as I don’t get chased by any oversized boulders or attacked by a tribe of pygmies with blowpipes then I guess I can live with the comparison!’


Taking a hefty swig from her water bottle, she smiled, relieved that her ability to laugh at herself was finally reasserting itself after days of being diminished by the heat.


Harrison grinned as he strolled to his side of the dig. ‘Gotta love that dry English sense of humour, doll.’


Beth called after him, ‘Thanks for the snake removal, Harry.’


He kept walking as he corrected her. ‘Harrison. It’s Harrison, I told you. I don’t like being called Harry.’


She shouted at his retreating back, ‘And I don’t like being referred to as a doll. It makes me sound like a character in an American B-movie! Message received?’


Still laughing, Harrison didn’t look round, but held up a hand as if in defeat. ‘Gotcha, doll! Message received.’...

If you’d like to find out what happens next, then Digging Deep is available as an e-novella or paperback from all good retailers, including–