I’m astounded that in a world where solitude and the meditative tradition is a part of almost every religious discipline, we shy away from the very concepts that could have well given birth to it, awareness and Body. There can be no awareness without a body. And how can we possibly understand the boundaries and the limits of either without the two rubbing up against each other. Our act of one-ness, our proto-sexuality, as Eric Francis calls it, I suggest is, by its boundary-exploring nature, also our proto-creativity. 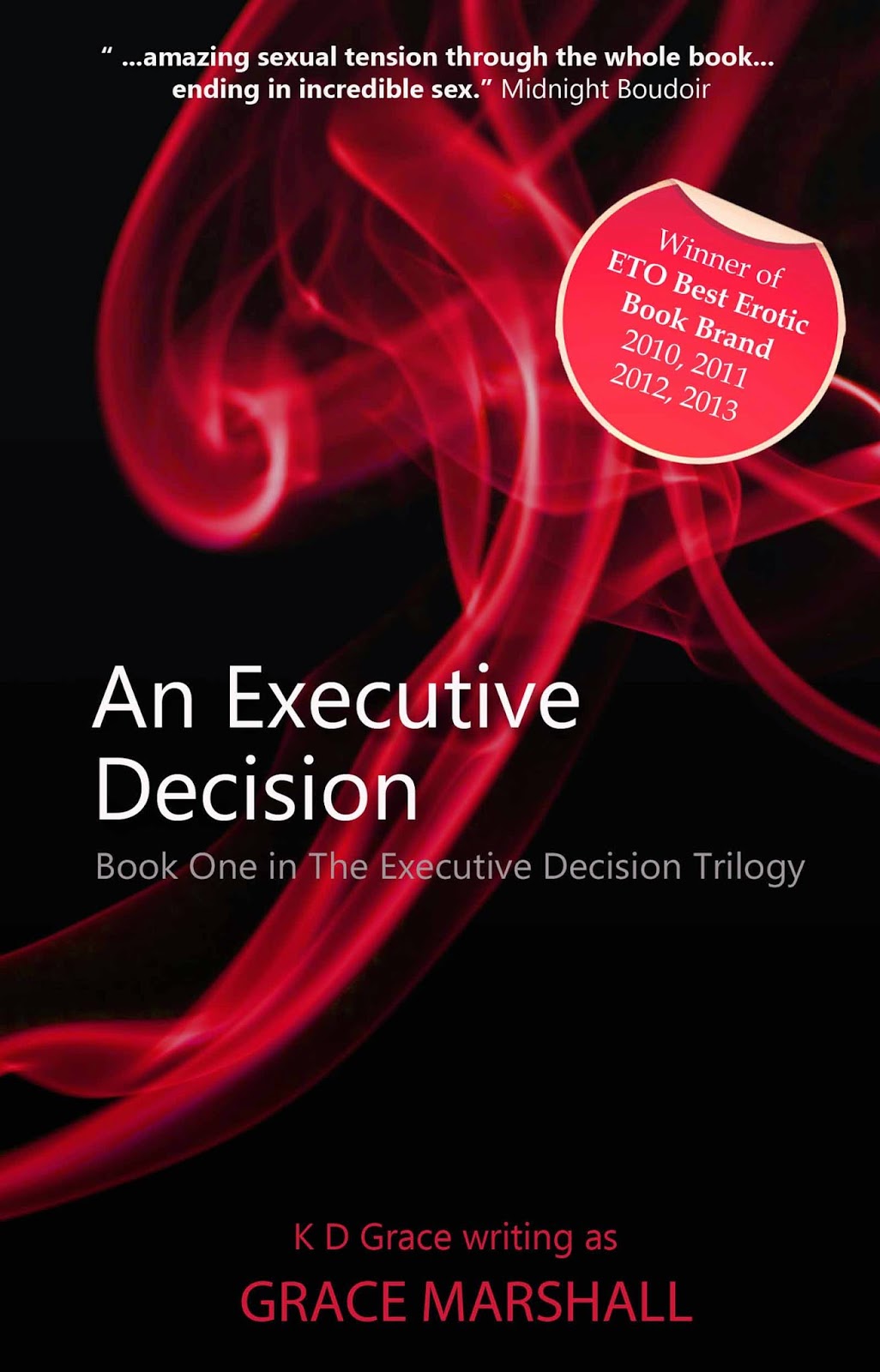 Blurb for An Executive Decision:

Sex in the contract – it’s the only way super-focused, over-worked CEO, Ellison Thorne, is ever going to get laid. That’s what his retiring business partner and secret match-maker, Beverly Neumann, thinks. She’s convinced no-strings, stress-free sex in certain employee contracts would raise productivity and minimize stress — perfect for a busy executive like Ellis. But she’s joking, right?

Enter her hand-picked replacement, Dee Henning. Young, hungry, gifted, Dee is the queen of no time for sex. When negotiations on a major project break down, and Dee and Ellis end up in each other’s arms, the Executive Sex Clause suddenly becomes more than a joke. In fact hot executive sex just might be the ultimate secret weapon for success. But secrets seldom remain secret, and Dee and Ellis soon learn there’s no such thing as no-strings where the heart is concerned.


Excerpt from An Executive Decision:


At last he pushed his chair back and looked up at her. ‘Marston refused the proposal.’


‘Not that it was a huge surprise, but I could have done nicely without him berating me for hiring someone incompetent and irresponsible to take Beverly’s place. That didn’t exactly make my day. What the hell happened?’


She felt the heat rising up her spine and onto her ears. ‘I overslept.’ She forced the words out into the chilled room.


‘Yes.’ She nodded imperceptibly, feeling the scrutiny of his glare.


For a long moment he just stared at her. She forced herself to meet his gaze and held her tongue, afraid if she tried to say anything she’d burst into tears, and she despised women who cried.


‘Well that’s a relief.’ He leaned forward in his chair and rose almost as though he were going to leap over the desk and pounce. The tension in his body was palpable. ‘I was afraid you were lying on the freeway somewhere in a pool of blood. I’m so relieved that it was nothing so dire, and that you simply overslept.’ With each word, his voice grew louder until he wasn’t exactly yelling, but neither was there any way she could miss his message as each word drove her deeper into her chair until she felt as trapped as if she had been tied there.


‘I’m sorry,’ she forced a whisper through the roadblock in her throat, but the stinging behind her eyes warned that a swift exit would be necessary if she were to avoid the flood.


‘Sorry? You’re sorry? Tally had to pick up the slack. Do you have any idea how that looked? Just when I was starting to make progress with Marston, just when the man was beginning to listen to reason, you oversleep. You made Jamison’s deal seem all the sweeter, that’s what you did. Now, tell me what the hell’s going on.’


He moved from behind his desk and paced the carpet in front of her like a bull ready to charge. ‘You’re supposed to be working to shore up the situation with Scribal. I told you up front that’s your major concern at the moment, then not only do you oversleep and miss an important meeting, but I find out you’ve been working on something else behind my back.’ Before she could respond, he turned on her. ‘Is Trouvères what you’ve been staying up half the night and missing meetings for? When I hired you, I never thought you, of all people, would neglect your responsibilities.’


‘I’m not neglecting anything. If you would just --’


He interrupted her. ‘Don’t think just because I gave you this job, you suddenly know it all. I took a big risk hiring you.’ He stopped pacing and rooted himself in front of her, close enough that she had to strain her neck to look up at him. ‘You want to do something; you bring it to me first. You’re not ready to make that kind of decision on your own. You don’t have the experience it takes to…to…  You’re not Beverly.’


His words were a hard slap, felt more than heard above the roar in her ears. She wasn’t sure the ragged breathing her brain finally registered in the chasm of silence that followed his tirade was his or her own.


The phone rang into the charged atmosphere and Ellis jerked it from its cradle in a strangle hold. ‘This had better be good, Lynn. Wade? What the hell does he want? Can’t it wait?  We’re not finished yet. I can what?’ He heaved a sigh of resignation and slammed the receiver back down. ‘Wade wants to see you right now. He says I can get back to you on this, and believe me, I intend to.’ He nodded toward the door. ‘Well, go on, at least don’t keep him waiting. Pick up the notes on the meeting from Sandra.’


She stood on trembling legs and turned to go. As she reached for the door, he called to her. ‘Dee, I strongly suggest you make no more attempts to prove Marston right about you.’


Still breathing like a freight train, Ellis watched Dee disappear shutting the door behind her. He grabbed up the phone and called his secretary. ‘Lynn, hold all my calls. I don’t want to be disturbed. How long? Until I say otherwise, that’s how long.’ He slammed the receiver down, snapped his laptop shut and stormed down the hall to the lounge.


He shoved his way out of his jacket and tossed it across the wingback chair, then practically strangled himself in his efforts to loosen his tie. From the coffee table he grabbed up the remote and plunged the room into the wild raucous ride of the third movement of Beethoven’s Moonlight Sonata. Then he dropped onto the sofa struggling to breath, struggling to regain control, struggling to figure out what the hell had just happened. All through the meeting, when Dee didn’t show up, he was terrified that something horrible had happened, terrified that he would lose Dee the same way he had lost Beverly. And the relief he felt at seeing her. Jesus, the relief was like nothing he’s ever felt before.


If Lynn hadn’t called, if Wade hadn’t demanded Dee’s presence … If Ellis had had one more second with her, he would have yanked her up from the chair and fucked her senseless right there in the middle of the day with all of Pneuma Inc just outside his door, fucked her as though he might never get another chance, fucked her as though his life depended on it, and that’s exactly how it felt. He wiped cold sweat from his forehead and struggled to breathe. If he’d lost her, Jesus! He couldn’t even bear the thought.


He jerked open his fly and sucked a harsh breath as he released himself into his hand and began to tug on his cock like the world was coming to an end. Christ, he couldn’t go on like this. It felt like he was always either avoiding her or jerking off thinking about her. And fuck if he wasn’t thinking about her all the time; the shape of her, the feel of her, the sass of her. He’d never wanted anything so badly. And then … and then she fucks up so royally that all he wanted to do was punish her, to turn her over his knee for giving him such a scare, to … to … to fuck her until she couldn’t walk.

An Executive Decision is available from:

K D Grace believes Freud was right. In the end, it really IS all about sex, well sex and love. And nobody’s happier about that than she is, otherwise, what would she write about?

When she’s not writing, K D is veg gardening. When she’s not gardening, she’s walking. She walks her stories, and she’s serious about it. She and her husband have walked Coast to Coast across England, along with several other long-distance routes. For her, inspiration is directly proportionate to how quickly she wears out a pair of walking boots. She also enjoys martial arts, reading, watching the birds and anything that gets her outdoors.