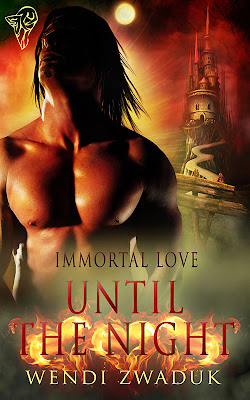 Thanks to Lily and the gang for having me here at Outrageous. I love chillin’ with the girls. J I thought I’d talk today about my latest work, Until the Night, part of the Immortal Love Collection over at Total-E-Bound.

What is the Immortal Love Collection? A group of four stories with paranormal slants and lots of hot sex. In the case of Until the Night, there’s my first foursome. Grin. Talk about a lot of outrageous. I knew when I sat down to write Gypsy’s story, it would be complicated. Gypsy first showed up in My Immortal and she had a ton of issues. Plus, there were three hot guys sort of vying for her attention. But MI wasn’t about her. She ended up on the back burner in that story, but that was fine.

I’m glad they all talked. Allan and Todd were a twosome, but Gypsy was good at turning heads. Then there was Kendall, the faithful friend who happened to look like Bradley Cooper. Who could turn that down? Apparently not Gypsy.  I had the tools to start, but there were a few issues.

Like what?  Each time I sat down to write her story, things didn’t gel. Nope. She didn’t want to talk and the guys didn’t want to cooperate. I must have had about five starts for her story. None of them worked. Then I saw the call for the Immortal Love Collection. That sparked me. It did! And it got them talking, too. Turns out, Gypsy didn’t have one mate. Not two, but three. Yes, three. How to work that all out? Yeah, a lot of choreography. I won’t tell how it works, you’ll have to read UTN to find out, but it’s white hot and a lot of fun.

I hope you enjoy my foray into the paranormal world of MMFM. I had a ball writing it and the characters loved...making all that love!

“You’re paler than normal.” Kendall put both hands up. “I know. Vampires are pale. But this isn’t like you.” He curled his fingers under her chin. “What can I do?”
Her heart hammered. What could he do? Get naked and take her on the couch, then offer his neck, that’s what he could do. Help her slake her need for sustenance and sex then confess he liked her for more than a friend.
Like that would happen. He had a girlfriend, last time she’d checked.
“Just tired.”
“I see that. When did you sleep last?”
“I haven’t.”
“Or fed, either.”
“It’s been a while.”
“Then I’ve got just what you need—a hot and hunky male to share your bed.” His eyebrows bobbed. “Like someone tall, blond and handsome who has lots of blood he’s willing to part with in the name of rescue?”
She laughed despite her tears. “Don’t tell me you’re applying. That’s one of the most horrible come-on lines I’ve heard.”
Kendall cupped her jaw in both hands. Hunger shone amongst the green and blue flecks in his eyes. He worked the muscle in his jaw and the light caught the subtle colour changes of brown and gold in the scruff on his cheeks. She gulped to catch the breath she didn’t need. No heartbeat anymore meant that oxygen didn’t help her body like it had when she’d been alive.
God, she wanted to be amongst the living and for things to be normal again.
“Would you rather I be blunt?” He kissed the tip of her nose. “I want you. I don’t care if you’re a vampire or if you have those two guys who hang out over here. You infiltrate my thoughts and make me think about you when you’re not in the same room.”
“Me?”

How about the blurb and where to buy? Here you go!

Having a mate can be a pain.
Having three…now that’s unheard of…

Gypsy volunteered to become a vampire, but she had no idea just what she’d agreed to do. As a human, she’d had her pick of willing males to warm her bed. As a creature of the night, she’s striking out. Until she meets Kendall. He knows what she is and doesn’t care. He’s loved her since he met her, but he had no idea just how complicated her life truly was. Her protectors refuse to leave her side. But what if he wants them on his side, too?

Allan and Todd are mates, plain and simple. Gypsy is in their charge. Period. Until they start to see her not as a problem, but a sexy solution complete with an adorable human thrown in for fun. Can they come together as a foursome or will they destroy everything they’ve built in the name of passion?

Like spicy romance? So do I! Come along on this journey with me.

I’ve always dreamt of writing the stories in my head. Tall, dark, and handsome heroes are my favorites, as long as he has an independent woman keeping him in line.  I love playing with words and letting the characters run wild.

If you like my work, tell your friends and email me. I love hearing from readers!