It’s something I hear all the time: “How can you write that stuff when you’re a mum?” My response is – I’m a woman as well. Sorry, but I’m married not dead, I like sex. I like reading erotic romances. I like writing hot sex scenes. But I wait until the kids are fast asleep before switching on my laptop or Kindle. Yes, I work in a school – I’m a responsible adult, and not all my conversations revolve around sex and relationships. In fact, most of the time I’m talking about Minecraft, FIFA, Star Wars, and Thunderbirds. (I work with a lot of 7 year old boys.) Even the adult conversation I get is mainly about the latest ICT programmes, session plans, and how to put new books onto the library system. My private Facebook page is full of pictures of my kids eating ice cream, playing in the park, or sleeping kittens. But that’s Charlotte Howard the mum, and who I am during the day.

The Facebook page you’ll see, the Twitter account you’ll read, and the Charlotte Howard you meet, is a flirt who writes smut and not ashamed of it. The Charlotte Howard you will get to know is married, but has a “special friend” (No, I do not cheat. He’s a friend who also writes smut, so we have a lot in common and talk a lot. But he’s not my husband...) Charlotte Howard likes to talk about sex, and her Facebook feed is not for the under 18s. Although there are still pictures of sleeping kittens...

Author me has a dark side. Author me likes new experiences, and touches upon them in the books, especially The Black Door, and my latest WIP, Educating Miss Beauchamp. Author me is planning on going to Torture Gardens in December, and regularly attends events like Smut by the Sea and Smut Luton. Author me is happy to divulge intimate details, it’s up to you to figure out if I’m telling the truth or not.

I am not friends with myself on Facebook – that would just be weird. And anyone who knows me is warned that they will see my split personality come to life, and that it is all about my books and life as an author. Sometimes I slip up. If you meet me in real life, at SmutFest for example, then the real me seeps through – and sometimes you will see Charlotte Howard the mum, not Charlotte Howard the author. Real me can be seen in Seven Dirty Words...

Excerpt:
“I’ve never seen a girl eat like you.” He laughed.
“I’m starving,” I said, in between mouthfuls of prawns and peas, trying to ignore the dimming room. A crash overhead started the storm’s symphony. Fat raindrops splattered against the window as the room lit with a sudden flash. Seconds later, another rumble filled the air. I shuddered.
“Are you okay?”
“I don’t like thunder storms,” I admitted, finishing the last of my noodles. The truth was I was afraid of any loud noise.
“Don’t worry, I won’t force you out in this.”
“I forgot to bring a coat,” I grumbled, rubbing my arms as though it had suddenly got cold.
Matt stood and peered out the window. “It’ll be a while before this is over.” He picked up the plates and took them into the kitchen. I followed him, not wanting to be alone.
As I walked in, I suddenly remembered the large windows, and saw the dreary sky blanketing the village. My eyes widened in fear as another flash filled the sky.
Matt smiled at me.
“What’s so funny?”
“You are.” He laughed, nearing me. “I didn’t think you were afraid of anything.”
“Appearances can be deceptive.”
“They most certainly can!” He took my hand and led me back into the living room. “Well, it looks like we’ll be here a bit longer than intended.” We sat back down on the sofa.
“And no TV to kill the time,” I said, staring at the empty fireplace. “Look, if you want to get rid of me, I can make a mad dash to the car door. It’s only rain.”
“I don’t want to get rid of you, Paige.” As he said my name, the hairs on my neck and arms stood on end. “But I’m not willing to share you either.” 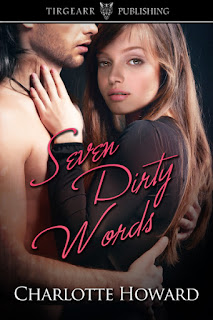 Paige Holmes hides herself in a masculine world in a desperate attempt to remain safe.

Which will she choose?

The one who appears to be the most perfect, or the one who makes her use all Seven Dirty Words? 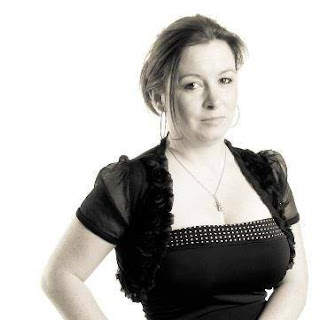 My career as a writer started when I was young, writing poetry and flash fiction for my friends and family. After a few minor successes of having pieces published in anthologies, and later on-line, I decided to have a go at writing a full-length novel. My first attempt was a bit of a disaster, but after years of practice, I finally got that coveted First Contract. Since then, I've written several more novels and short stories, and I don't intend to retire for at least another 50 years.

Charlotte lives in Somerset with her husband, two children, and growing menagerie of pets and can always be found with a cup of tea in her hand. When she's not writing or running around after small people and animals, she loves to eat curry and watch action films.

Charlotte is an active (and vocal) member of the Yeovil Creative Writers.

GIVEAWAY!
Make sure to follow the whole tour—the more posts you visit throughout, the more chances you’ll get to enter the giveaway. The tour dates are here: http://www.writermarketing.co.uk/prpromotion/blog-tours/currently-on-tour/charlotte-howard-3/
a Rafflecopter giveaway