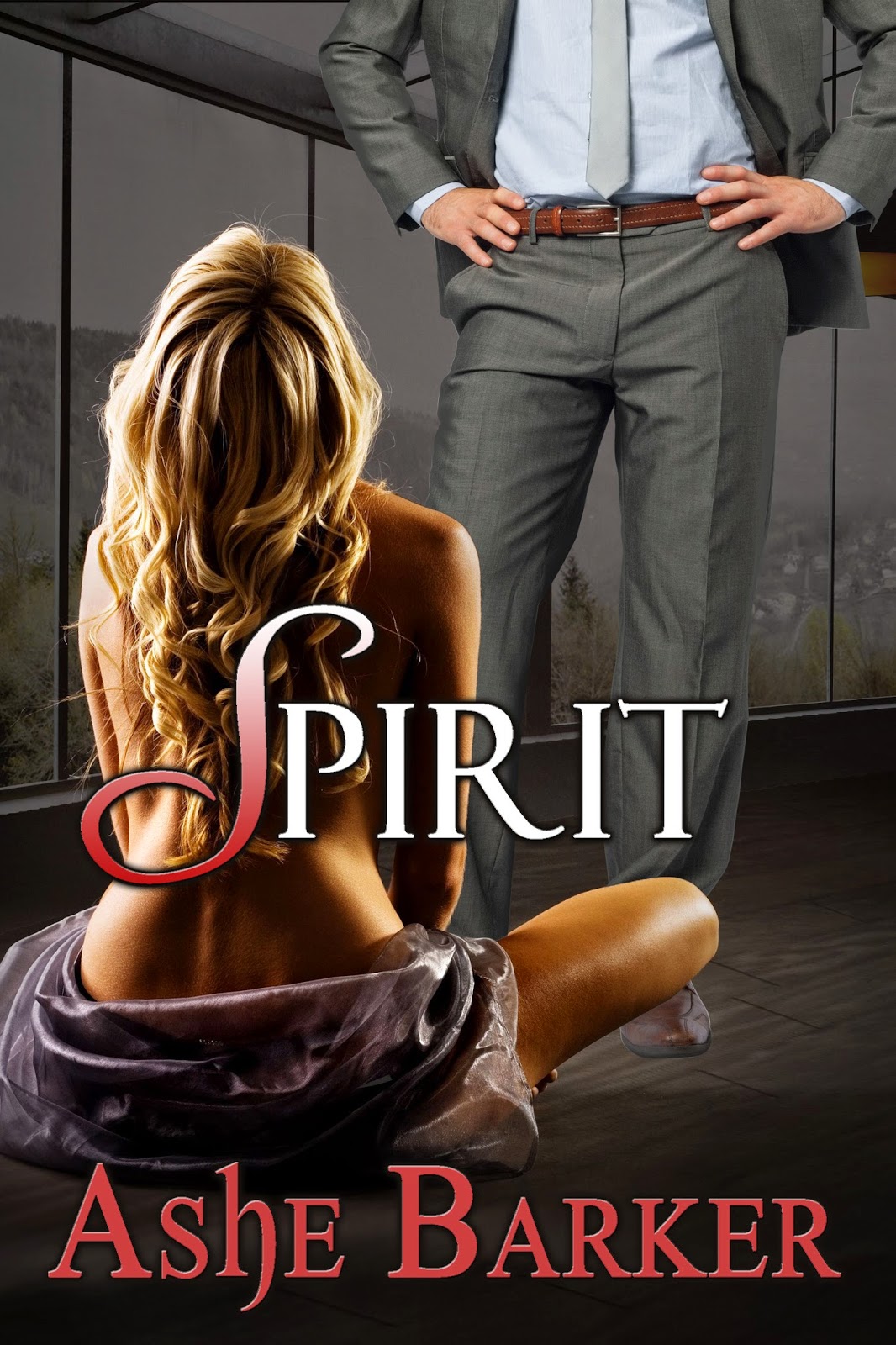 Spirit is the latest sizzling release by Ashe Barker. Here's the stuff from the back cover...

When Matthew Logan offers a homeless young woman a bed for a few nights, he expects the girl to eat, sleep, recover from the flu, and then move on. Instead, in no time at all eighteen-year-old Beth Harte has captured his affections completely. Though Matt wants only to protect her and has no intention of sleeping with her, Beth has other ideas, and she proves to be very persuasive.

But after Beth is attacked by a friend of Matt’s and subsequently learns for the first time that Matt is an experienced dominant, she is unable to separate the man she is growing to care about from her hateful memories of previous exploitation. Confused and frightened, she runs away.

Almost six years pass before Matt sees Beth again, and in that time his vulnerable little waif has reinvented herself as an artist. Now she has a stunning proposition for him and his environmental engineering company: to collaborate on a project fusing art and science to promote one of the most prestigious sporting events in the world. But when Matt demands to know what went wrong before, she tells him the truth, both about her childhood and about his friend’s actions.

Matt is determined to make Beth’s abusers pay for their crimes, but he’s also not about to let her run away from him again. Can Beth bring herself to trust Matt despite her fears and give him the chance to love her and show her the pleasures of being his submissive, or will the wounds of her past keep her from trusting anyone ever again?

And a hot excerpt, naturally

Matt's asleep. The sound of his gentle breathing reaches me, and as I stand in the doorway I can just make out the shape of his body in the bed. He is lying face down and the quilt covers him only as far as his waist. The light spilling from the main room is just sufficient for me to make out his well-defined shoulders and the faint ridges of his ribs. His customary suits normally cover all this up, but now, in these few moments before he inevitably awakens, I can survey his relaxed male perfection at my leisure.
Sure enough, with a low grunt, he rolls onto his back and opens his eyes.
I know he sees me straight away, framed in the doorway and silhouetted by the light behind me. He doesn't speak at first, but I swear I can hear the cogs whirring as he considers how to react. He opens his mouth to speak, and I know from the look of resignation in his eyes that he's about to pack me off back to my safe, chaste bed.
I forestall that by grabbing the hem of my - his - T shirt and pulling it over my head in one swift move.
Matt's jaw clamps shut, and a flash of something else - anger perhaps - glitters in his eyes. Brief, then it's gone. I lift my chin and hold his gaze.
The moments crawl by as he peruses my body, displayed for him now in all my hopeful glory. I know him well enough to be sure that if he rejects me it will be done with kindness, but it would still be rejection and I will be mortified. So much so, perhaps, that I would be unable to remain here after this. Too late I realise I've backed myself into a corner. He has to want me, He simply has to.
Please. Please.
"Are you looking for something, Beth? A clean T shirt, perhaps?"
"I'm looking for you."
He lifts one eyebrow, but his expression is softening now, his eyes darkening. He reaches for the lamp beside his bed, and the room is filled with light. Harsh, revealing light.
Still I stand before him, reluctant to move forward uninvited, but even more determined not to retreat.
"Well, you found me. So now, what do you intend to do with me?"
"I want to get into your bed."
"You want me to fuck you."
It's a statement, not a question but I nod anyway. I manage not to embarrass myself further by saying 'yes please', but it's there, hovering on the tip of my tongue.
"More fool you. Come here, Beth." He flicks back the corner of his duvet by way of invitation, and I'm across the room in a flash. I scramble into the bed beside him and throw myself across his chest. His arms close around me, his palms warm on my shoulder blades as he caresses my shivering body.
"You're cold?"
"No."
"Ah. Beth, you're so fucking gorgeous you take my breath away, but this won’t work. You're too young, too inexperienced. You don't know what you're letting yourself in for."
"I want you. I want you."
He gives a low chuckle. "Determined little thing, aren’t you? Well it looks like you're gonna have me, love."
"Please, be quick. I can't wait..."
"Ah, but you'll have to. You're dancing with a gorilla, baby."
"What?"
"You decided to take to the dance floor, but that's the last decision you get to make. It's my show now."
"Oh, but I..."
He rolls to his side, taking me underneath him. I find myself staring up at an expanse of naked chest, then his lips are on mine. I open my mouth, loving the sensation of softness and discovery as he plunges his tongue between my lips. He explores, tasting me, tightening the grip of his fingers in my hair when I try to move. I want to deepen the kiss, try to lift my head towards his, but he's having none of it.
"Gorilla, love." His low growl against my ear sends a shiver straight to my pussy, before he resumes his attentions to my mouth.
I relax under him, surrendering to his wishes, to his leadership in this matter. He's right, I did take the initiative, I did push this, and I've got my way. Or I'm going to. But he's very much in charge. I relish the gentle exploration of his tongue as he strokes the backs of my teeth, my inner cheeks, then tangles it around mine. I suck on his tongue, catching it between my teeth when he would have withdrawn. He tightens his grip on my hair, and I release him.
"I'm not your first. You said that. Your second then?" His voice is low and sexy, a little bit rough.
I shake my head.
"Third?"
I nod.
"How long has it been? Since your last time?"
"A while."
"How long?"
"Two years. Nearly."
"You were just sixteen then?"
"Yes."
"Hmm, not a virgin, not quite. Or should that be, very nearly? If I hurt you, or scare you, I want you to tell me, Yes?"
"I, you won't. I know you won't."
"Honey, you know next to nothing. Just promise me."
"I promise." I give him the assurance he seems to demand. I'd say anything, more or less, just to get him to move on with this. I want him, I need him, now.
Matt smiles at me and relaxes his grip on my hair. He reaches for my right wrist and lifts that above my head, then the left. He taps the metal rail of his headboard.
"Grip that with both hands. Do not let go."
"Why?"
"Because I said so."
Good enough. I wrap my fingers around the cool rail and hang on.