Kay Jaybee is Making Him Wait 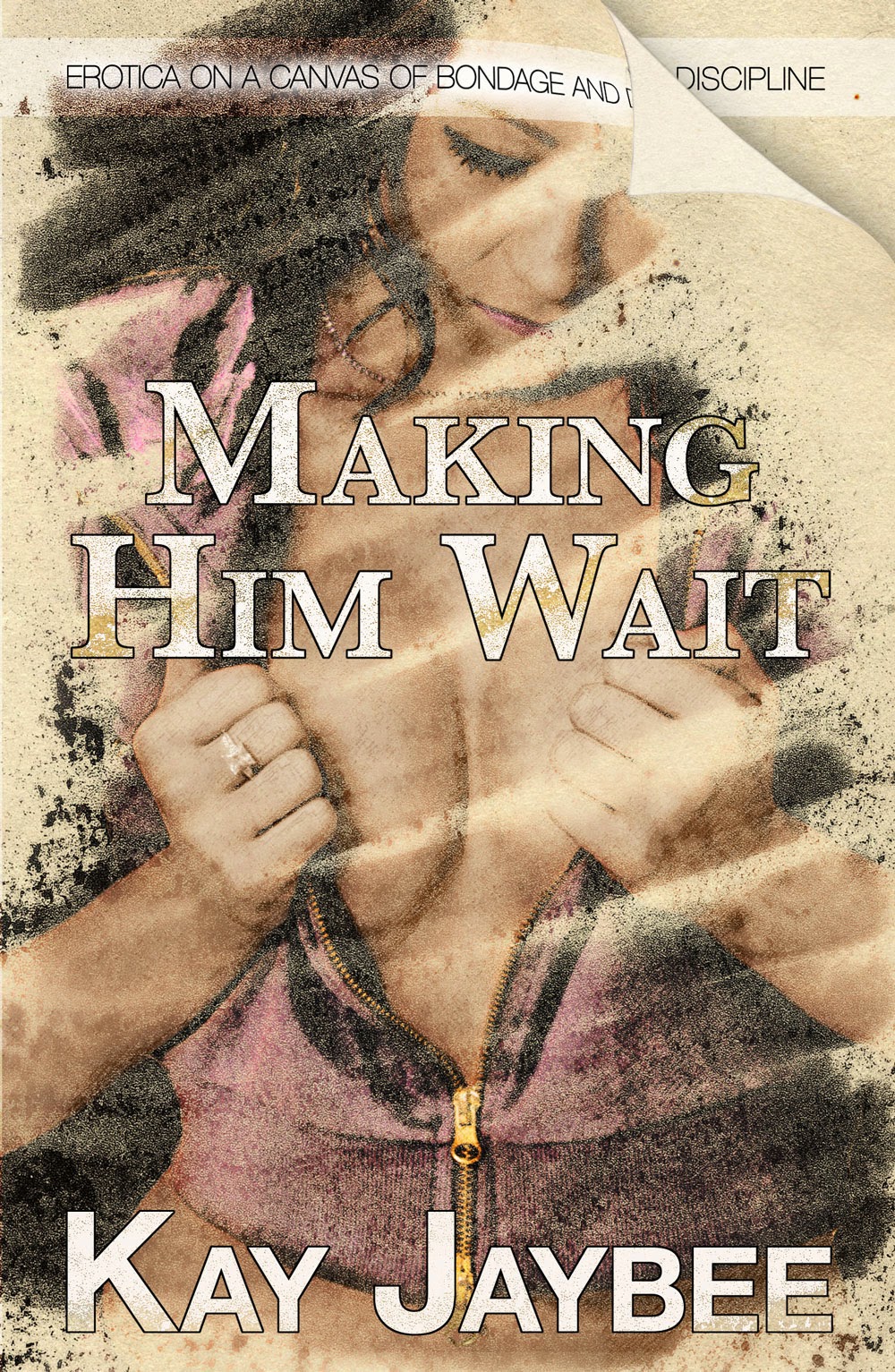 Let me give you a little hint as to what it’s all about...

The artist in question is one Maddie Templeton- and she is a game player- a complete control freak- or more accurately - a self-control freak.

When, after years of painting commissions, Maddie gets the chance to have her first ever art exhibition at the newly refurnish Stripped Banana Gallery, she jumps at the chance. But the time she is given to create twelve brand new works of art is short, and only by enlisting the help of her favourite client, Sara (as featured on the cover of the book), and her partner Jake, life model Freya, and by suffering a visit from Tania, her self-centred vamp of an ex-girlfriend, does Maddie have any chance at all of getting her pieces completed on time.

Ignoring the buzz of her mobile phone, Maddie placed the worn stub of charcoal to the side of her easel and took a step back from the girl before her.

Maddie nodded with approval as her newest model – a petite blonde – flexed the muscles she’d been keeping stock still for the previous half hour.

“Control, Freya – at least the appearance of control – is everything.” The artist reached out an affectionate hand to her muse.

Freya rocked a little on her bare feet as Maddie touched her lightly freckled cheek. “No need to look so worried, honey. You are doing brilliantly. It’s a difficult pose to hold for so long.”
“Thank you.” Blushing an endearing shade of pink, Freya lowered the hands she’d nervously clenched before her, giving her employer another chance to see the neat triangle of her semi-shaved pussy.

Maddie, her jeans and t-shirt smeared and spattered with all the mediums of her trade, did not feel the need to mention to Freya that her own knickers were sodden, nor that beneath her holster bra, her nipples were rock hard.

Smiling to herself, Maddie continued to disregard her phone and considered the exquisite outline of her companion’s porcelain frame. Most people came to Maddie to be drawn or painted, sometimes as a commission for a lover, husband or wife. Some, however, like Freya, came to the studio as a way of improving their self-confidence. Despite her generally shy demeanour, Freya had proved to be very good at posing as Maddie required and the artist had offered her an occasional job as a life model.

Money being either plentiful or non-existent, depending on the current success of her commissions and sales, Maddie had been forced to develop an alternative form of payment for her models – a reward system for good work. Maddie could tell from the rise and fall of Freya’s chest and the glistening damp skin at the top of her thighs, that she was more than ready to be paid for today’s session.
Closing in on her model, Maddie simultaneously cupped Freya’s slick pussy and left breast with her charcoal-blackened hands, causing an involuntary shiver to ripple through the younger woman’s body.

“Your progress really is outstanding, honey. Few of my models can stay as motionless as you can.” Congratulating Freya on her skill, Maddie left two dark palm prints on the girl’s tits and tapped at the inside of her legs. “Open up. I think you have deserved a treat after all your hard work.”
Gliding her palm over Freya’s mound, Maddie slipped a gentle finger into the slippery canal of the model’s frantically clutching sex, enjoying the murmured mew of contentment that escaped from her lipstick-free mouth.

Pumping gently, the artist brought Freya close to orgasm with steady increases and decreases of pressure – her own mind straying to her mobile. Maddie wondered where Theo was and what he was doing. She knew what he was thinking about. She always knew that. Theo thought about her.

Pushing her happily sex-drugged model onto an armchair, Maddie’s own arousal kicked up a notch as she bent to lick Freya’s nub, swiftly bringing her to the dawn of a shuddering release.
While continuing to take pleasure in the sweet taste of another woman on her lips, Maddie considered how she’d phrase her responses to all the messages Theo had sent and how she’d tell him precisely what and who had held up her replies.

Inhaling Freya’s climactic scent, Maddie’s hands roamed up and over the small, orgasm-jacked body, her thoughts still with Theo. His work-calloused right hand was probably on his dick at that very moment. A heady hit of power consumed Maddie – a power as intense as the climax of the woman panting hard in the chair before her.
Maddie loved making him wait...

****
I hope that little teaser to the plot line has whetted your appetite!

Oh- before I go- I will give you one excellent piece of advice- if you ever meet anyone like Maddie, you should make absolutely sure that you listen very carefully to every word that person says; otherwise you might find that what you think they are offering you, is very different from what they are offering you..

If you would like to buy Making Him Wait, it is available from Amazon, Amazon.com, Sweetmeats Press, The Book Depository, WHSmiths, and other good book and e-retailers.

Kay Jaybee was nominated as the Best Erotica Writer of 2013 and 2014 by the ETO.


Brit Babes Site- http://thebritbabes.blogspot.co.uk/p/kay-jaybee.html
Posted by Kay Jaybee at 7:30 am