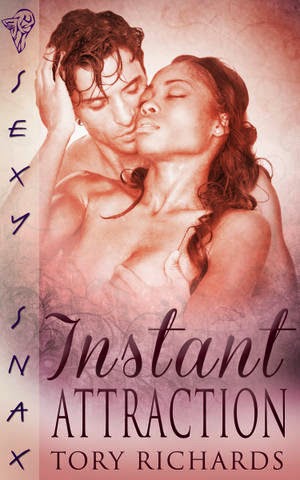 His meaning was very clear. “Then I guess it’s a good thing I have you and your, ah, big gun around to protect me.”

He nodded his understanding, and started to walk towards her. The gun was still in his hand, hanging at his side. He laid it on top of the fireplace mantle, never taking his gaze off Julie. She stood her ground, barely breathing, highly turned on. She let her eyes caress his defined biceps and hard abs, then farther down, to where his zipper would be if he had one.

Oh, my God! His cock is as hard as a rock! Is this for me or does he have company at his place?

He stopped close to her. “That was a nice little show you put on earlier tonight.”

Julie swallowed with difficulty. She hadn’t thought he would actually bring it up. “I’m glad you liked it.”

“Do you usually welcome newcomers to the area like that?” He took another step closer.

Julie shook her head. “Only the special ones.” She smiled.

“I guess I’m lucky then.” His last step took him as close as he could get without touching her. “Am I crazy here?”

His tone was barely above a whisper, his accent a little more pronounced. Julie began to shake her head, not understanding his question. His hot gaze was holding hers captive. She found it hard to breathe with him so close. The tingling ache in her breasts moved down to her charged pussy.

“I’m not sure what you’re asking,” she whispered in response. It wouldn’t take much to close the distance between them. Then she’d have his hard cock against her. Geez, just thinking about that caused a rush of wetness to soak her inadequate thong. And he smelt so nice. Warm and spicy, and something else she couldn’t put a name to…manly.

“Am I crazy to think that you’re as attracted to me as I am to you?”

She wasn’t going to deny it, act stupid or make him have to drag it out of her like she was some virgin. “Oh, God, you feel it too? I thought it was just me.” That was all she had time to say.

Thomas moved and she unexpectedly found herself up against the wall, crushed by his aroused body. They hit the wall so hard the pictures around them rattled. His mouth was just inches from hers. “I’ll take that as a yes.” His lips covered hers without hesitation.

Available at Totally Bound
Posted by Tory Richards at 5:01 pm