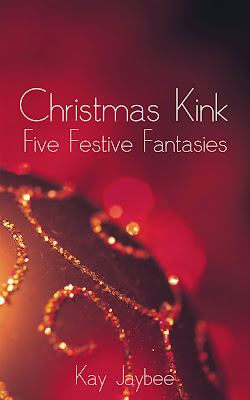 When it comes to Christmas I’m a big kid - I just love it. The decorations, carols, wrapping up presents - all of it. So it’ll be no surprise to you to know that I love writing Christmas stories as well. There is something about dreaming up naughty ways of playing with tinsel, spices and Christmas cakes that brings out the kinkster in me...

What’s your favourite part of the Christmas celebration? Decorating the tree with tinsel, the heavenly aroma of cinnamon and fruit from Christmas cakes and puddings, the office Christmas party, a visit to Santa’s grotto, the presents?
Kay Jaybee’s Christmas Kink twists all of these festive traditions into five individual episodes of hot erotica that will leave you fanning yourself with the nearest Christmas card...

Over the past 9 years I’ve written an annual Christmas story- and this year I decided (with a lot of help from my the lovely Lily Harlem) to self publish a few of my past seasonal tales, plus a brand new one- The Little Red Dress.
Romantic, steamy, with a touch of S&M, and a sprinkling of cinnamon (yes, really) - I hope I’ve managed to add a little Christmas kink into this anthology for everyone...

Here’s a little taster from the first tale in the book...

Jay gazed approvingly at her reflection in the tinsel decorated mirror. The gold material shimmered as she turned from side-to-side. Cut to fit tightly against her chest, the bodice section gave way to an extremely short, almost tutu style skirt, of the finest silvery gauze.
Her fingers trailed through the soft folds before she reached around to stroke the feather like wings that protruded from her back.
The fabric curtain was drawn back and the sales assistant drew breath. ‘You are possibly the most beautiful fairy ever destined to top a Christmas tree.’ He pulled the ties tighter at the back of the bodice, forcing Jay to stand up taller. ‘You are also the sexiest.’ He pushed two exquisite high-heeled shoes towards her white stocking clad feet, enjoying the view as her tiny gold thong flashed in front of his eyes when she bent slightly to slip them on.
As a final touch he slid a delicate glittering tiara onto her short curled hair, and put a wand in her hand. ‘Now, all that’s missing is a smile.’
‘I am smiling.’
‘That’s not a smile, that’s the evil grin of a wicked slut who knows that every guy that claps eyes on you is going to be asking Santa Claus if he can screw you for Christmas.’
Jay laughed.
‘I was thinking you could go for the child friendly smile. After all, you’re supposed to be Santa’s Little Helper at one of the department stores right?’
Jay nodded, and tried to wipe the lust off her face. Not easy when she felt so damn horny dressed like an expensive tree decoration. She thanked the assistant, paid the costume hire charge and, wrapping a large black cloak around her shoulders, left the shop for her place of work.
The shop assistant had been right, she was to be Santa’s Little Helper, but this was not a grotto for children; his joke had been closer to the truth than he’d thought. As Jay reached ‘Spanks’, the club she’d worked in for two years, she slipped into one of the back rooms, and into the discreetly advertised grotto.
Santa, already dressed in his traditional red and white, with huge false beard and hat in place, stared at her with giveaway young eyes as she hung up her cloak. He didn’t say anything, but slipped a gloved hand up her skirt and slowly stroked the tops of her legs. Jay purred at him, enjoying the sensations for a few seconds before moving away.
It was show time.
The queue was fairly small, but as visits to Santa had been by appointment only, this was not a surprise.
After the first five men had sat on Santa’s lap and asked to have their Christmas wishes granted, for which they had already paid handsomely, Jay was glad to have a break. She needed a drink to remove the taste of condom and sweat from the three blow jobs she’d given, and needed to calm her own rising desire after the last two guys activities.
They had visited Santa together, sitting on a knee each, they’d requested an intimate examination of her chest. Santa had obliged, removed his gloves and undid her bodice, revealing her bare tits. The visitors fell on a breast each, both using their given five minutes to gorge on her, and feel up as much of her body as they could.
Jay knew that she had at least four more customers to grant wishes to before she could even think about her own satisfaction, but her tits, now firmly secured back behind the gold fabric, nagged at her for more attention, and she knew that she was far more tuned on than was professional.
Santa stuck his head around the door. ‘Five minutes honey.’
She nodded and took another sip of water.
He paused, ‘Do you think you’ll make it? I’ve never seen you so horny, I can practically smell you?’
‘Shit, it’s this outfit. I’ll be fine.’
‘We have a little time. I could help.’
‘Santa, what do you mean?’ Jay adopted a little girl voice and fluttered her eyelashes provocatively.
‘I mean, my dear little fairy, that it’s time you had a quick turn on my knee.’
****

If you’d like to see what Santa did next, or you fancy dipping into the other stories- Decorations, Cake Mix, Candy at Christmas or The Little Red Dress- you can buy Christmas Kink on Amazon at-

Many thanks for letting me pop by and an early Merry Christmas to you all! 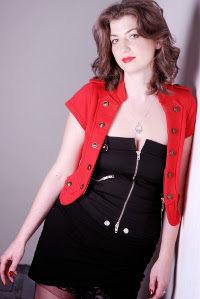