* Updated!* Out Now at eXtasy Books - The Devil Take You - Epic Historical Romance

Brae and Gard are back! *well almost* 😉 I am beyond excited to bring this story back. When I say EPIC, I mean this story is over 140,000 words and over 400 pages, but I promise, you will fall in love with Gard Marschand and Braelynn Galbraith. Gard is a man tortured by secrets, and those secrets have driven him to commit some deplorable acts, but he has zero remorse. Revenge is the only thing that keeps him going. He's the classic brooding anti-hero. Brae, simply wants peace for her beloved Scotland, and she is weeks away from marrying her childhood sweetheart. But when Gard and his men lay siege to Braelynn's little shire, he unintentionally shatters her dreams.

*** Updated *** Surprise Surprise— Even to me! Apparently The Devil Take You, can now be purchased at eXtasy Books, as of March 29th. Coming to other vendors soon!

1307 - During the Scottish Wars of Independence 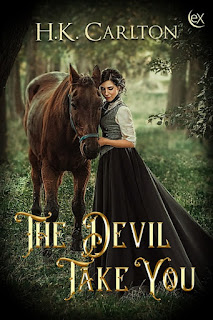 Braelynn Galbraith wants peace for her beloved Scotland, marriage to her childhood sweetheart, and a house full of children. In that order. But evil incarnate, in the form of Gard Marschand, turns her life inside out and destroys all hope of a decent marriage.

Known in the Highlands as the legendary devil, Gard Marschand raids his way across Scotland and England amassing power and property in his malevolent wake. He will stop at nothing in his pursuit to regain what is lost—even conceal his true identity and associate with his enemies. His determination is all-consuming until he and his men lay siege to Ross-shire holding and one feisty Scottish lass obliterates his single-minded purpose.

Can Gard abandon his deep-seated need for revenge for a love that just might save his rotten soul? Or will he succumb to the demons that hound him and surrender to the devil within?

I believe your stay in purgatory has only just begun…

What a fabulous, well crafted story! I could hardly put it down. I love Brae as much as I loved Holly in the Always Cambridge series. They’re not the same character at all, but Brae is just as spunky, brave, creative, smart and grounded. Well done, HK!

This book was wonderful in so many ways. Feisty heroine, brooding hero, historical facts woven into the plot, descriptions of sweeping landscapes, drama and intrigue... well-deserved praise!


I love a good historical romance, especially those set in Scotland. With a spirited young miss in Brae and a rogue in Gard, HK Carlton has created two of my favorite characters in The Devil Take You. With a story that ranks with those of Jude Deveraux and Nora Roberts, HK's tale will sweep you up in a tide of passion and intrigue that will keep you turning pages. 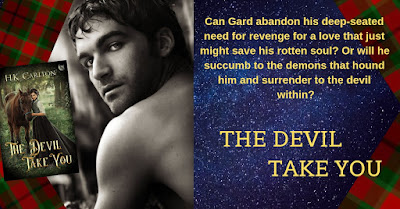