She turned gracefully into his arms, and he pulled her even closer against him. The first thing Chaz noticed was her light scent, then the softness of her fragrant hair against his nose. He clenched his teeth, unprepared for the rapid reaction of his body. They moved slowly to the music, and he was aware of every movement her lower body made against his tortured hardening cock.


A soft sigh escaped her, and to his surprise Val wound her arms up and around his neck. It meshed their bodies until they became one. Does she know what she’s doing? There was no way he could hide his hard-on, and he found he didn’t want to. He wanted her to know what she was doing to him, to know that he wanted her. Without protest from her he wedged his leg between hers. He felt her shudder.


His hands flexed against her waist. Then, unable to help himself, his palms smoothed over her hips and around to her shapely bottom. Her jeans were skin tight, letting him feel that she wasn’t wearing panties. His cock throbbed at the discovery and he squeezed her rounded cheeks before he could stop himself. His breathing turned heavy as he imagined what it would feel like fucking her sweet ass.


Chaz wasn’t the only one breathing hard. Val was definitely affected by their intimate proximity. In fact, the lady was straining against him like a cat seeking to be petted. Smiling to himself, he nuzzled his nose into the hair behind her ear, before clamping his teeth down onto her earlobe and giving it a tug. He wanted to devour her.


She gasped and pulled back to meet his eyes. Even on the dark dance floor he could see hers were ablaze with desire. “I think we should return to our table now.”


Her tone was barely above a whisper, and shaky, and yet Chaz heard her loud and clear. He glanced over to see that the waitress had just delivered their food. “Maybe we can finish this later.”  A vision of their naked, entangled bodies brought him into full-blown arousal, the kind that would linger until fed.


He seated her and then went around the table to sit in his own chair. God, he was hungry. And it wasn’t for the thick steak sitting in a puddle of blood on his plate. He was ravenous for Val, not just any woman, as it had been in the past. He wanted to taste every inch of her…inside and out. 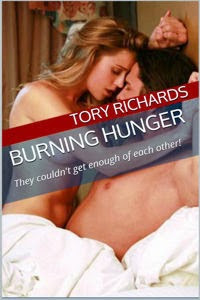