Welcome to Outrageous! We have four authors here today who have written a unique series about shifters. Dish the dirt, ladies! 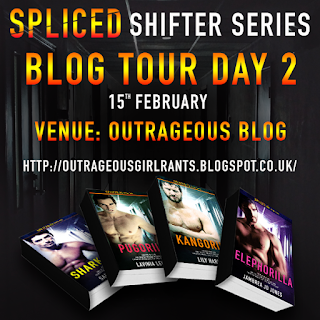 Do you have plans to write any more Spliced stories?

Sarah – I’ve started one already. Tigorilla, about Armin, a German splicer, who meets up with Benjamin, a wolf shifter. I won’t say any more than that for now, but the story woke me at four in the morning, and I couldn’t stop thinking about it, so I had to get up and write the prologue. I love it when that happens. It means the story will flow when I’m writing, and there’ll be none of that infuriating stalling business where I stare at the screen and try to force words out. I usually walk away at that point, but with Sharkorilla, I was able to keep going because I enjoyed the idea of that world so much. Plus, working with three other authors means you’re all in it together, your work reflects on each other, so I want to create a good book for them as well as readers.

Lavinia - Definitely! I’ve got a Bearorilla story in my head that just won’t leave me alone; in fact, I’ve already started work on it and hope to finish it as soon as I’m done with my other commitments.

Lily - Oh yes, there are many more of these poor spliced souls that need saving. The plot lines are endless, and fun, and oh, so sexy. Plus we can have the characters travel the globe in their search for acceptance and love and their mates.

Jambrea - I would love to. There is so much we can do with the series.

Did you worry about reader reactions to your Spliced Four?

Sarah – At first, yes. I know, being a realist, that the idea of a man being part gorilla, part something else was a stretch of the imagination. Once we started writing and sharing our stories as we went along, though, I knew we had nothing to worry about. Unless I’m biased lol. There will be folks who don’t like our shifters, but as with any book, some people enjoy them, some don’t. But…there will be many, please God, who do like them and fall in love with our boys as much as we did. I have a really big soft spot for this series.

Lavinia - I did. My main concern was that people wouldn’t take the stories seriously. Even though they are the product of a few hours of fun between friends, there is definitely a serious side to the stories. The shifters have a lot of anxiety about how they will be perceived in the outside world. Will they fit in? Will people ridicule them? Will they ever find love when they look the way they do in their shifted form? So yes, readers’ reactions were a concern. There is a little humor in the stories, but there’s also a lot of heart.

Lily - No, I think readers of paranormal are pretty open minded when it comes to shifters, and who is to say, if shifters exist in their suspension of disbelief that spliced shifters can’t? The stories were fun to plot but they come with serious eroticism and handle issues of acceptance and self-belief.

Jambrea - Not really. I think readers are always looking for new and interesting books to read.

Here are the blurbs!

When scientists mess with the most primitive elements of a man’s core, the results are bound to be explosive.

Living a loveless existence is hard for any shifter, but having DNA spliced with creatures who stand out from the crowd is damn near impossible. Which is why four experimented-on souls decide to break free from the chains that hold them, climb the fences that circle them, and go in search of adventure, passion and most of all, their mates.

But nothing worth having is ever easy, and for Sharkorilla, Pugorilla, Kangorilla and Elephorilla, this is definitely the case. They’ve come to the end of one very long, hard and frustrating road, but now, with the help of men who have big hearts, they must shed their fears, accept their bodies, and be true to the desires that burn within them. The only problem is, will they get away with it?

Please note, Spliced can be enjoyed as individual stories, but reading in order enhances the pleasure as you get to see the progression of the shifter's sexy adventures.

Sharkorilla – Mason has been tasked with the job of helping his fellow shifters escape from the compound. Two techs need his help to ensure the breakout goes smoothly. One of those techs, Brennan, has a thing for Mason—and Mason has a thing for Brennan too.

Once Mason and his three friends are out of the compound, running for their lives across the expanse of the Yorkshire Moors, Mason wonders whether they’ll manage to be free for more than the time it takes to speed farther than a few feet. Freedom—the feeling of it is addictive, and Mason wants more of it. He isn’t prepared to give it up without a fight.

With Brennan by his side, Mason knows he can accomplish anything. There is one burning question, though. Can Mason really accept who he is? Can he learn to love himself as half shark, half gorilla? If he doesn’t, he has a feeling life won’t be all roses, despite being free of the compound.

So, he’ll just have to give his new life his best shot, won’t he?

Pugorilla - After being created in a lab, his DNA spliced with both canine and primate genes, Dex has spent his entire life locked up. He has always longed to see the outside world and to find lasting love with that one special person—dreams he never thought would come to fruition. Yet when he and his friends discover a plot to kill them all, they have no choice but to plan an escape. A life outside the walls of their compound is everything that Dex has ever hoped for, but there’s only one problem—James, a lab technician who Dex can’t seem to get out of his heart or head.

Kangorilla – Joey has it tough. Not only has he been spliced with a kangaroo and a gorilla, he’s also been brought to the other side of the world. Feeling exploited, desperate and wishing he had love, companionship and acceptance, he takes the risk of leaving the compound in the search of happiness. But will he find it? Or has the person he’s drawn to got other ideas? It certainly seems that way as the temperature goes from boiling hot to downright frosty.

Elephorilla - George hates change, but when his only two options are death or escape, he runs away with his friends into the unknown. Will he be able to find not only a new life, but a new love?