Tory Richards has a NEW Release! 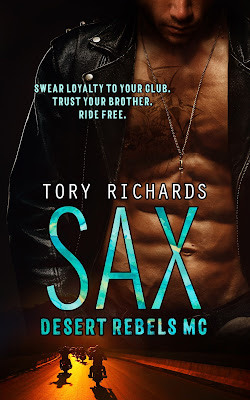 Available in ebook and soon to be in print, book 4 of my Desert Rebels MC Series, SAX! No cliffhangers but recommended the series be read in order. And guess what, you can get book 1, Cole for free until the end of the month!
Blurb
It had been a year since the woman Sax loved walked away. He'd thought Holly had been it for him, that he'd found something that would last a lifetime. But some things just weren't meant to be. After a year on the road, he returned to the Desert Rebels, ready to move on with his life without her...until she shows up...and with a baby.
Excerpt
"Which one of my brothers do I kill?"

The coldness of his tone frightened me. He meant it. "I never cheated on you," I whispered hoarsely. A sob escaped me. "I love you."

He pounded the pillow next to my head. "Enough," he snarled impatiently. "I don't want to hear that f**king lie out of your mouth again." Even as he growled the angry words, he kept his voice low.

It wasn't a lie, but his tone revealed that he wouldn't believe that it was anything but. That he'd made up his mind, and he was too filled with hate and rage to contemplate any other possibility. Ava could very well be his, but telling him that wouldn't help at that moment. He was fueled by alcohol and another emotion that I hadn't seen in him before. A kind of desperation.

"I loved you." Again in the past tense. His tortured whisper broke me. "I. Loved. You." His mouth moved against the side of my neck as he spoke, the feel of his firm lips causing little tingles down my spine.

I felt his hands glide down the side of my barely clad body where he gripped my hips brutally hard. I remembered how good we were together. How every time we'd f**ked, it had felt as if it were the first time all over again. The excitement, the intense ride to completion, had never waned between us.

"Jesus…I missed this," came his quiet voice right before he inhaled deeply. "Missed your smell, your laughter, how good it feels loosing myself in you."

I squeezed my eyes shut tightly, seeing Mitzi on his lap. "I'm sure you haven't gone without since our breakup."

He stiffened against me, his hands clenched my hips. He pulled back far enough so that I could see the glitter of his eyes as he glared down at me. "You're so wrong, Holly. I never considered us over."
Amazon US
Amazon UK
Universal Link
Tory Richards Bookstore
Posted by Tory Richards at 5:00 am