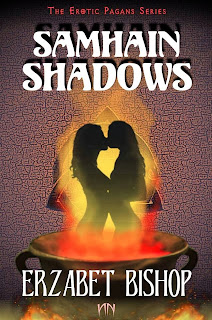 
“Are you ready for tonight?” Jasmin tucked an errant raven curl around her ear and tidied the shelf next to the register. It was full of seasonal frivolity, pumpkin candles and stuffed witches riding on broomsticks.
Nodding absently, Brigit laid out the dried oregano from the garden. “Are you going to be here for the cooking class next Wednesday?” She minced it into small pieces and scooped them into a large glass jar, sealing the lid with a twist. She moved on to the rosemary. One of the things the shop was best known for was the home grown herbs.
“Yes. Have you decided what we will be making?” Jasmin restocked bags and watched as one of their regulars, Ms. Busby fussed around the Halloween display and selected a bag of gummy bats. “For my granddaughter Elise.” She laid the candy on counter and smiled at Brigit. “You look so very like your mother. I am sorry she won’t be with us this year. I remember how much she loved Halloween.”
Brigit looked up from her herbal preparations and fought not to give into melancholy. Coaxing her lips into what she hoped resembled a smile, she willed herself to relax. The woman really was a dear. “Thanks for stopping in Ms. Busby. Give my best to your sister.” She brushed her hands on her well worn jeans and pulled down the tight fitting purple tee with “Boo” written in sparkling silver letters across her chest. It was one of the last gifts her mom had given her and it felt good to wear it.
“I will. Happy Halloween!” The older woman smiled and gathered her purchases, her plump body moving toward the door like a small force of nature.
“Thanks Ms. Busby. You have a great Halloween too.” Jasmin chuckled. The woman was no more a witch than her Uncle Francis. Ms. Busby waved goodbye, clutching her candy and a stuffed cat with a pointy hat.
“Thank you dears! Goodnight!” She hurried from the shop and Jasmin and Brigit smiled. Her joy in the holiday catching.
“So, have you decided about whether you’re staying home or not?”
“I think so.” Brigit smiled. “Molly should have everything she needs for the ritual.” She tightened the lid back on the jar of rosemary and placed it back on the shelf.
“So you aren’t going?” Jasmin from behind the counter and turned the closed sign on the door. “Everyone will wonder where you are, you know.”
Brigit sighed. “I know. I just don’t feel very celebratory, Samhain or not. Bathsheba hasn’t been doing well and I have been waiting to hear from Dr. Oliver.”
“But it’s the New Year. You need to stop being so isolated.” Jasmin bit her lip and gave her a light touch on the arm. “I’m worried about you, honey.”
“I know.” Brigit shrugged, tears threatening to fall. “I just need a little more time to deal with her passing, Jas. Bathsheba is lonely for her too. She’s an old cat and I’m worried.” She looked at the phone and bit her lip.
“I wondered where that furry menace had gotten herself off to. Are you sure that’s the only reason you’re waiting to hear from the good doctor?” Jasmin wiggled her eyebrows and grinned, trying to lighten up the mood.
Brigit felt a blush creeping up her neck. “I…um.”
“Ha! I knew it. You and that gorgeous vet were throwing enough sparks to set a bale fire burning.” Jasmin’s smile curved upward in approval.
“She’s probably seeing someone.” Brigit moved back to neaten up the herb table.
“Do you at least have your poppet?” Jasmin picked up her sweater and purse and walked toward the door.
“Yes.” A small white lie. It was still on her worktable in the back of the shop, half made. The poppet was to represent all of the negative habits in her life that she wanted to burn away in the Samhain bale fire. She had made one every year since she had been a girl. It was something she and her mother usually took great pains to work on together. This year she had cut out the dolly and as soon as she began to stuff it with intentions, the void of her mother’s passing became too great.


Jasmin raised an eyebrow. “You really are such a liar. We’ll miss you tonight. If you change your mind, I’ll save you a place.” When Brigit shook her head she nodded. “Okay, if you need me, call. Blessed Samhain, Brigit. Don’t do anything I wouldn’t do.” Taking her leave, Jasmin left, shaking her head and shutting the door behind her.

Coffee or tea?
Both. Just depends on the time of day.

Heels or flats?
Flats or bare feet usually. I work as a bookstore manager and I walk a lot, so flats are much more practical.

What inspired Samhain Shadows?
I wanted to write a Samhain/Halloween story that captured the Pagan path and really showed the traditions used in some Pagan communities across the globe. Poppets, Books of Shadows, feathers...all of these things have meaning. The book also looks at death as a beginning and has some fun kitchen kink to inspire the more adventurous of us.

Erotic Pagan?
This series came about with a short story that became Beltane Fires, the first book in the series. Naughty Nights was impressed with the tale and a series spin off ensued. Pretty cool, huh? The idea behind the books was to highlight Pagan traditions with an erotica slant to show people how beautiful many of the traditions are if they keep an open mind. I have made the series all inclusive. There are f/f (Samhain Shadows) and m/f (Beltane Fires) so far and there are plans for more stories. I am writing Yuletide Temptation (m/f) right now, in fact and it will be out for Yule/Christmas in 2013.

If you could have one witchy superpower, what would it be?
Right now, I would love to be able to hold out my finger and zot all the housework.

How much time during the week do you spend writing?
As much as possible. On my two days off, I am pretty much planted on the two computers I work from. I write under two names and that keeps me super busy. I also write before and after my shifts at the store. My hours vary from day to day, so I adjust accordingly.

Where do you write?
At my desk in the bedroom.

Name three things on your writing desk at any one time.
Just three? *snicker*
*My stash of goodies.
*My Pop Glinda and Wicked Witch of the West figures
*Water. Lots and lots of water.
That doesn't count the absolute mountain of books, sewing things and yarn that make up most of it. lol. Oh, and my two computers. lol. 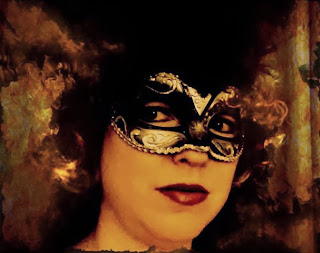 Posted by Erzabet Bishop at 2:49 pm