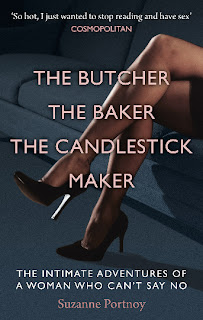 Please welcome Suzanne Portnoy here at Outrageous. I had the pleasure of reading her book, The Butcher, The Baker, The Candlestick Maker, which is utterly hilarious and an eye-opener I won’t forget in a hurry. It’s a memoir, and as I was reading I was amazed at the courage it must have taken to write everything that had happened in such an honest manner. It’s a very interesting romp through a time in Suzanne’s life where she was extremely sexually active. I recommend it for lovers of erotica but also if you’re fascinated by the choices people take in life.

Sit back and enjoy her interview, then a sneak peek of her book, which, let me tell you, has too many funny lines to count, and lastly, my review.

Welcome, Suzanne! What prompted you to write about a part of your life that was so personal?

I was sitting at my desk in my office. It was August 2005 or thereabouts. I was 43 and juggling about six lovers, plus going to swinging clubs at the weekend where I would usually shag at least one or two others. A few years earlier I had been in a celibate marriage. I remember thinking that if I didn't write it all down I would forget it all later in life or wouldn't believe it myself.

Which chapter was the most difficult to write?

Without giving away too much of the story, the day that my partner died and what happened after. It was a day of such extremes, I didn't know if I would be able to write it in a such a way that the reader would be able to sympathise with me.
Did you find that you could separate yourself from it being real and write as though it were fiction?

Well, I never tried to make it fiction. It is a memoir so I didn't have that problem.
What was the reaction from people who knew you personally?

Most of my closest friends haven't read 'Butcher, Baker.' They had all heard most of my stories over the years and didn't want to know the intimate details! The ones that have read it enjoyed it and, in a couple of cases, it would seem I spiced up their relationship.
How did writing your book change you?

When 'Butcher, Baker' first came out and went to No. 20 in the non-fiction charts on Amazon, I became a minor celebrity. I got asked to do newspaper interviews, appear on television. It was quite fun and a bit scary. One national newspaper thought I was sleeping with famous, married men and tried to out me. They were disappointed when they discovered that my lovers were all very ordinary men. I had a couple of scary online stalkers too. I can honestly say I became a cartoon character and took delight in shocking people. Seven years down the line, I've put it all behind me and now have a very down-to-earth monogamous relationship with a lovely guy.

Did you find yourself healing throughout the writing process?

I think the only way to write an honest memoir is from an objective viewpoint. It was cathartic but not necessarily healing. And while writing 'Butcher, Baker' I was still very active on the swinging scene so I was living the life and writing about it. It has actually taken me until now to see that some of my shenanigans were pretty stupid and, in some cases, dangerous. At the time I had so much energy and appetite to try anything new and different, I wasn't thinking about the repercussions.

Since writing your book, have you looked at the world differently?

Very much so. I wasn't a great believer in monogamy for many years and went to great lengths to avoid intimacy. Being the principle  flag waver for swinging, I felt I had a responsibility to practise what I preached. And I practised a hell of a lot! When I turned fifty, I had one last swinging party and realised I had absolutely no interest in having lots of sex with strangers. I had seen it and done it and I wanted to rediscover intimacy and be part of a couple. Thankfully that realisation coincided with meeting my partner and we've been together ever since.
I can imagine writing was cathartic for you, but was there ever a time when you asked yourself whether you should hit SEND at submission time?

I remember a couple of weeks prior to the book first being published wondering if I had done the right thing. I was very scared at what people might think and worried how it might impact on my day to day life. I was lucky that the reception I got from the media and readers was almost universally positive.

What are you up to now?

Where can we find you on the internet?

Do you have links for where your book is available?

Amazon UK
Amazon.com
Would you mind sharing an excerpt with us?

EXCERPT:
Only ten minutes to go. I look at the clock: 12.50 p.m. At one I grab my briefcase and my jacket and tell my receptionist, a pretty young blonde girl with a penchant for heavy-metal music, ‘I have a meeting in town. I’ll be about two hours.’
Within minutes I’m off the grotty main road and removing my clothes in the changing room before heading into the sex zone – Rio’s. There are two naked black guys sitting in the Jacuzzi. The bubbling water is covering up most of their bodies, but I can still tell one of them is quite overweight. He reminds me of a laughing Buddha. The bubbles can’t disguise the blubber around his neck and flabby arms. The other guy is slim, muscular and hot. He’s clean shaven, including his head, and I see fantastic biceps and can make out the beginning of a sculpted chest. He has big dark eyes and a welcoming face. I walk closer to the Jacuzzi to get a better look, because I’m not wearing my glasses and want to make sure my eyes aren’t deceiving me. No, I think, he really is very hot. I walk up the steps to the Jacuzzi, take off my towel and step naked into the water. I’ve found my target.
Sometimes people aren’t friendly in spas. It might be a matter of taste – You’re not my type – get lost. Or it might be territorial – This is our room, get lost. I’ve seen guys spread out in a Jacuzzi meant for six, not to mention sex, so that it’s impossible for anyone to join them without sitting on a foot. They’re just rude. Luckily, these boys are in a friendly mood; otherwise it might have been a challenge to find a way to initiate a conversation with the handsome one.
‘Thought you normally came on a Wednesday,’ the fatty says.
‘Yeah, I do, but couldn’t get away from work this Wednesday,’ I say. ‘I do come on other days, you know.’
A couple of minutes later, the laughing Buddha announces he’s off to the sauna, leaving me and the hottie in the tub together. I’ve got a little over an hour to get this guy into one of the relaxation rooms and have an orgasm. It shouldn’t be too difficult. I position myself so I’m directly across from him.
‘I’m Sam,’ he says. ‘Suzanne.’
‘Nice to meet you, Suzanne. I haven’t seen you here before.’ ‘I usually come at Wednesday lunchtime,’ I explained. ‘As you heard. This is the first time I’ve been on a Friday.’ I look meaningfully into his eyes. ‘I’ll have to come more often.’
We discuss what we do for a living. He’s a property developer with a sideline in making corporate videos. He is sweet and relaxed and I like him instantly. A few minutes more of this casual chit-chat passes, then I say, ‘Fancy going upstairs?’
‘Really? Wow. Sure.’ He seems surprised, perhaps taken aback that I’m so direct.
I’m in.
I learnt that the direct approach usually works. As my mother taught me, ‘If you don’t ask, you don’t get.’ She was talking about a waiter bringing us an extra round of bread. I learnt to adapt that advice to satisfy my needs. When you’ve only got an hour to get laid, small talk is a waste of time.

I read this in one sitting, unable to put it down due to wanting to know what happened next—or who would be next on the sex list. A fascinating insight into the life of a woman who would, it seemed, try anything once! I admired her courage in telling all and sincerely hope she has found her happiness after a long time of searching for the man who can give her everything she needs. I'm sure, due to the way some people are, that this woman's choices were frowned upon by many, but as far as I could see she made sure her children were shielded from her lifestyle and only introduced them to the men she was serious about. If she lost friends while enjoying her sex life, then that's a shame, but as far as I'm concerned, it shouldn't matter what she did between the sheets (or anywhere else for that matter!), she's still the same person she always was. All in all, I admired her for doing what she wanted despite the dirty looks and people undoubtedly talking behind her back. I feel it takes a strong person not to back down and "behave" in a way others feel is better, and that was the best part of the book for me. She did these things anyway, because that was what was good for her at the time. Yes, a refreshing book/tale!